Saunders (Sonny Terry) Terrell, blind black singer and harmonica player, was born in Greensboro, Ga., but in 1915 moved to Rockingham, N.C., where he was reared. He was partially blinded in an accident in 1922, came to be known as Sonny Terry, and met similarly blind guitarist Fulton Allen (Blind Boy Fuller) in 1934. Moving to Durham, Terry frequently played on the streets around East Pettigrew with both Fuller and blind Gary Davis, occasionally as a trio. By the time he was nineteen he was traveling with medicine shows and soon afterwards played in tobacco warehouses in Durham. 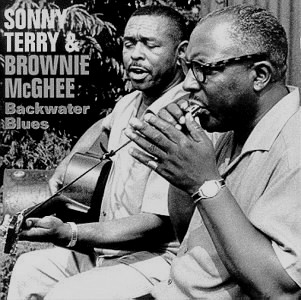 940 Terry accompanied the popular Blind Boy Fuller on songs from every recording session, held in Columbia, S.C., Memphis, and Chicago, as well as in the more usual New York. Terry made his first commercial recordings under his own name in March 1940, on one track from which Fuller accompanied him on guitar; this was the only time Fuller deigned to accompany another artist on record.

In 1938, by chance, Terry was heard by John Hammond, an executive with Columbia Records, who persuaded him to attend the Spirituals to Swing concert being staged at Carnegie Hall. Terry's manager was J. B. Long from Elon College, who also managed Blind Boy Fuller, who died in 1941. Long chose a guitarist from nearby Burlington, Walter Brown McGhee, to fill Fuller's role, even billing him as Blind Boy Fuller No. 2 on record. Terry came to replace McGhee's regular harmonica player, and when Terry was invited to perform at a concert in Washington, D.C., in 1942, he chose "Brownie" McGhee to accompany him. At this point, both men accepted offers to play in New York and did not return to North Carolina for over thirty years.

As Brownie McGhee and Sonny Terry they became the best-known duo in the blues-folk scene, and, playing together, they became part of a very small group of black folk artists who made their living from their music in the white market. Once in New York, Terry was frequently in demand for recording sessions. He also appeared on Broadway in Finian's Rainbow and with McGhee in Cat on a Hot Tin Roof and Steve Martin's film, The Jerk . Terry provided some of the sound-track music for The Color Purple . He rode the folk boom in the late 1950s and 1960s, touring extensively with McGhee throughout the world.

Terry made his home in Queens, Long Island, N.Y., with his wife, Emma. They had no children.

Bruce Bastin, Crying for the Carolinas (1971)