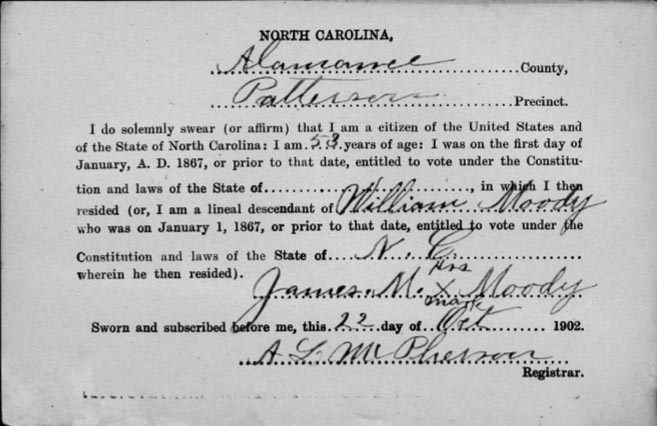 The Grandfather Clause was an important component of the 1900 constitutional amendment restricting North Carolina's class of eligible voters. The disfranchisement amendment provided that voters must be able to read and write a section of the state constitution in the English language and to pay a poll tax. Far from attempting to encourage literacy, however, the primary goal of the amendment, as admitted in the Democratic Party's pro-amendment campaign in 1900, was to eliminate African American voters as a factor in North Carolina politics. The large number of poor illiterate black males, as well as the bias of white Democratic registrars, ensured that the literacy test and the poll tax would be used to reduce the electorate.

The drafters of the amendment were aware of the politically unacceptable fact that illiterate whites could also be excluded by the literacy test. The answer to this problem was the grandfather clause, which stated that no one should be denied the right to register and vote because of the literacy requirement if he or a lineal ancestor could vote under the law of his state of residence on 1 Jan. 1867, provided that he registered before 1 Dec. 1908. The 1867 date was important because it preceded any federal prohibition of racial discrimination; therefore very few blacks were eligible to vote. In practical terms, it meant that illiterate whites were absolved of the embarrassment of a literacy requirement and blacks were not, thus enhancing the discretionary power of Democratic registrars.

North Carolina's grandfather clause was modeled on a Louisiana statute, and similar versions appeared at roughly the same time in Alabama and Georgia. By its terms, it expired in 1908. In 1915 the U.S. Supreme Court declared a similar clause in Oklahoma to be an unconstitutional attempt to deny voting rights on the basis of race.

Voter registration card from Alamance county, N.C., 1902. From the North Carolina Department of Cultural Resources / Office of Archives and History.