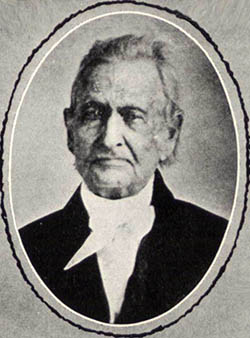 In 1805 U.S. Supreme Court chief justice John Marshall and district judge Henry Potter, sitting in the U.S. Circuit Court for the District of North Carolina, considered the claim to the Earl Granville estate of about 300,000 acres originally bestowed on loyal Cavaliers and the Lords Proprietors by King Charles II and regranted by King George II. North Carolina's confiscation of this Tory property during the American Revolution and its subsequent grants of the land ignited an ejectment action in 1801 by Granville's devisee, represented by the formidable William Gaston. Marshall removed himself from the proceedings on grounds of bias related to his participation in a Virginia syndicate that purchased portions of the vast Lord Fairfax estate sprawled across Virginia's Northern Neck. His apparent response to local public opinion left Potter to charge the jury in a manner favorable to the state's confiscation and to its grantees.

Gaston's appeal to the Supreme Court foundered in an environment of unpropitious domestic and foreign events. The case lingered on the docket until 1817, when the parties consented to its dismissal. By that time the Court had delivered its landmark opinion in Fairfax's Devisee v. Hunter's Lessee (1813), protecting from state destruction the Fairfax title and those holding land under it, including John Marshall. The outcome differed in North Carolina, where withering of the Granville appeal meant extinction of the original title to the benefit of North Carolina grantees whose labors had rendered a wilderness productive and valuable. Nathanial Allen was a member of the Lake Company, which in 1788 completed the draining of 100,000 acres of extremely fertile land in Tyrrell (now Washington) County.