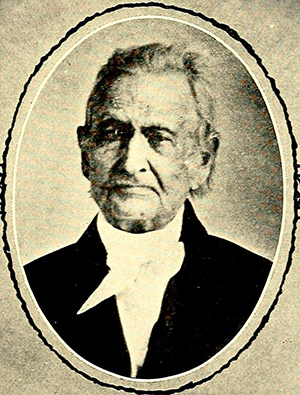 Henry Potter, lawyer, federal judge, and supporter of education, was born in Mecklenburg County, Va., of English ancestry. His father was John Potter, a planter and substantial property owner who moved to Granville County, N.C., when Henry was a child. The elder Potter was active in the Granville area, serving as a vestryman and justice of the peace. His wife was the widow Mary Howard Hawkins. Henry was one of six children raised in affluent circumstances, but little is known of his early education. During the inception of the new republic he spent two and one-half years in Philadelphia, where he coupled academic and perhaps legal studies with an active interest in and acquaintance with prominent national political figures.

About 1790 Potter returned to North Carolina and settled in Raleigh, where he immediately established a successful legal practice and became a conspicuous public figure. A supporter of Thomas Jefferson, he came to the president's attention in May 1801, when Nathaniel Macon successfully urged his candidacy for the judgeship of the U.S. Fifth Circuit Court, created under the Federalist-inspired Judiciary Act of 1801. Potter's commission was dated 9 May. He had held this position less than a year when Jefferson nominated him on 6 Apr. 1802 to be federal district court judge for North Carolina in place of the deceased John Sitgreaves. The following day the Senate confirmed the appointment.

During his fifty-five years of district court service Potter presided over cases involving counterfeiting, the Admiralty, bankruptcy, and federal crimes. Perhaps his most important contribution as a judge came early in his career in the case of Coventry v. Davie, whose central issues paralleled closely questions raised in the more celebrated case of Martin v. Hunter Lessee (1 Wheaton 304). Potter's charge to the jury was apparently instrumental in the jury's decision to deny the claims of the heirs of Lord Granville to an immense corridor of land running from the Atlantic Ocean to the Mississippi River through parts of the states of Virginia and North Carolina.

In addition to his judicial duties Potter engaged in a variety of political, public, and private pursuits. In 1816 he supported James Monroe for the presidency and eight years later he was an organizer on behalf of Andrew Jackson. Potter, William Polk, and Archibald D. Murphey foiled attempts by the supporters of William H. Crawford to deliver North Carolina's presidential electoral votes to the Georgia senator. Potter also provided important legal services to North Carolina beyond his judgeship. In 1819, along with Bartlett Yancey and Justice John L. Taylor, he revised the North Carolina statutes. The two-volume edition, primarily the work of Potter, appeared in 1821 and represents a landmark in North Carolina legal history. Also of importance was Potter's pioneering manual on the conduct of justices of the peace, entitled Duties of the Justice of the Peace (1816), which urged statewide order and uniformity in the conduct of that important office.

Potter served several terms as a commissioner for the city of Raleigh, acted as one of the commissioners in 1813 to erect an executive residence for the governor, and served on another commission in 1833 to sell several parcels of state land and procure stone for the capitol. He was also a distinguished and active supporter of education. Beginning in 1799 and continuing for over half a century he was a trustee and veteran fund-raiser for The University of North Carolina. In addition, he was a trustee of Pomona Academy, located northwest of Raleigh, and was one of the original trustees of the Raleigh Academy, which opened in July 1804. Potter was also an active Mason, a subscriber to the State Bank of North Carolina, and one of the founders of Raleigh's Brick Presbyterian Church.

Near his sixtieth birthday Potter moved his home from Raleigh to Chelsea, an estate near Fayetteville. There he engaged in agricultural activities assisted by a small number of slaves. Potter was married on 24 Jan. 1799, in Raleigh, to Sylvia (Sylvania) Williams Easton, the daughter of James Easton, a native of Hartford, Conn., who was a major in the North Carolina militia and a Raleigh merchant. Of the couple's ten children, six lived to adulthood. Potter was buried with his wife, who died on 25 Oct. 1853, at Cross Creek Cemetery, Fayetteville. A portrait hangs in the federal courthouse in Fayetteville.

The case files of Potter's court, a few of his decisions, and charges to juries can be found in the Federal Records Center, East Point, Ga. A small collection of Potter manuscripts is held by the North Carolina State Archives, Raleigh.