The Presbyterian Church, rooted in Calvinist theology, was founded by sixteenth-century Scottish reformer John Knox. The first Presbyterian minister to conduct services in North Carolina was Francis Makemie, who is regarded as the father of the Presbyterian Church in America. Makemie arrived in the colonies in 1683 and before his death in 1708 organized numerous churches in Pennsylvania, Maryland, and Virginia. Makemie made his home on the Eastern Shore of Virginia and on his travels preached in most of the American colonies, including North Carolina.

Immigrants from Ireland, Scotland, and Wales who began arriving in North Carolina in the 1730s and 1740s organized the first Presbyterian congregations in the colony. The first Scotch-Irish immigrants settled in present-day Duplin, Pender, and New Hanover Counties in the 1730s. A few hundred colonists from Ulster settled on the lands of Henry McCulloh and Arthur Dobbs in Duplin County and formed the nucleus of the Grove Church approximately three miles southwest of present-day Kenansville. Presbyterians from Wales settled in what is now Pender County and eventually formed the Rockfish congregation near Wallace.

The larger migration of Scotch-Irish via the Great Wagon Road began coming into the backcountry in the 1740s. The earliest congregations in old Orange County included Hawfields, Eno, Little River, Redhouse, Hyco Red House, Bethesda, and Grier's. The Buffalo and Alamance churches in present-day Guilford County and the Speedwell Church in what is now Rockingham County were organized by 1764. In addition, at least 13 congregations had been organized along the tributaries of the Yadkin and Catawba Rivers before 1770. There were three meeting places in Rowan County: Fourth Creek, now the First Presbyterian Church of Statesville; Cathey's Meeting House, later Thyatira; and Osborne's Meeting House or Centre. In the part of Anson County that was set off as Mecklenburg County in 1763, Steele Creek, Goshen, Sugaw Creek, Rocky River, Coddle Creek, Unity, Hopewell, Philadelphia, and Providence congregations were formed. Poplar Tent congregation was centered west of present-day Concord in Cabarrus County. 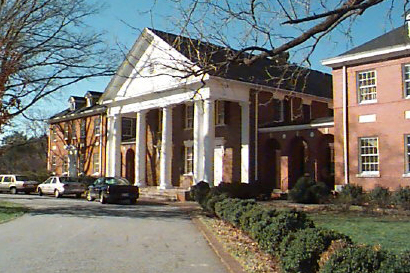 The Highland Scots who settled on the Cape Fear River around Cross Creek brought their Presbyterian faith with them to North Carolina. However, many of the first settlers in the Cape Fear Valley were Scotch-Irish. James Campbell, the first regular minister, was called in 1758 to the three congregations in the Highland settlement. He preached twice each Sunday, first in Gaelic and then in English.

Governing authority in the Presbyterian Church is divided between church sessions and higher "courts"-presbyteries, synods, and a general assembly. In 1741 the Presbyterian Church was divided by issues growing out of the Great Awakening. The Synod of Philadelphia or the "Old Side" opposed the revival and generally did not ordain anyone who had not been educated in a Scottish university. The "New Lights" or the "New Side" Synod of New York emphasized the more emotional approach to the faith and were willing to ordain ministers who had received a "private education" by studying under another minister. Although the two synods were reunited in 1758, the debate over these matters remained an issue in the early church. The first North Carolina congregations, which were organized during this period of internal division, were most often served by New Side clergy trained in the American colonies.

The first New Side ministers in North Carolina became members of Hanover Presbytery in Virginia. In March 1770 the six ministers who were serving churches in North Carolina requested that the Carolina churches be organized as a separate presbytery. The following May the synod created Orange Presbytery (so named because two of the ministers lived in Orange County), which included all of the congregations in the Carolinas.