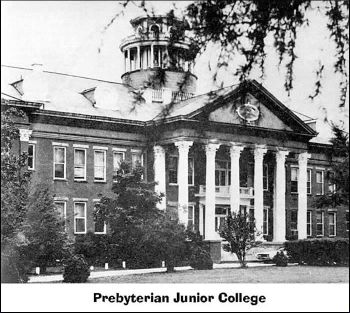 St. Andrews Presbyterian College in Laurinburg was preceded by a number of institutions with ties to the Presbyterian Church. They include Donaldson Academy and Labor School, which was founded in Fayetteville in 1833 and existed in some capacity until 1883; Floral College; and Flora MacDonald College, previously called Red Springs Seminary (1896-1903) and Southern Presbyterian College and Conservatory of Music (1903-14). Other predecessors to St. Andrews included Elise Academy in Robbins, which came under the jurisdiction of the Fayetteville Presbytery in 1904 and remained open until 1940; and Presbyterian Junior College for Men (1929), an offshoot of Elise Academy located at Maxton.

Flora MacDonald and Presbyterian Junior College merged in 1958 to form what would become St. Andrews Presbyterian College, named for the University of St. Andrews (founded in 1411), the premier Christian university of Scotland. The new institution, briefly called the Consolidated Presbyterian College, was situated on 800 acres of land south of Laurinburg. St. Andrews formally opened in 1961 and soon acquired a reputation for innovative curricula and facilities. Its Christianity and Culture Program included courses in European history, non-Western cultures, American studies, and futurism. The late 1970s witnessed the implementation of the St. Andrews General Education Program, which sought to integrate elements of the Christianity and Culture Program with more consideration of world affairs. The college augmented its preprofessional offerings as well as majors in business administration, mathematics, natural sciences, and psychology. In 1978 the North Carolina Department of Public Instruction designated St. Andrews as the campus for the Governor's School East.

St. Andrews Presbyterian College changed its name to St. Andrews University in 2011, coinciding with the 50th anniversary of the college's opening in 1961. https://www.sapc.edu/PDF/2011/092211sau.php

Was Gaelic taught at the

Was Gaelic taught at the college?

Thanks for visiting NCpedia and taking a minute to post your question.

That's a really great question!  Unfortunately, we're unable to locate an answer after a research including historical materials about the college.

You  may wish to contact the Scottish Heritage Center at St. Andrews (910-277-5236) or the DeTamble Library special collections department at St. Andrews for more information on the history of the college https://www.sa.edu/detamble/.

There are also several books

There are also several books that have been published about St Andrews (both by the SAU Press, and individually published as well). When contacting St Andrews, ask for Bill Caudill. Not only is he in charge of the Scottish Heritage Center, but he is also a St Andrews Presbyterian College Alumnus.