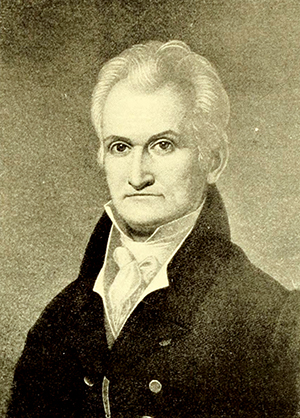 William Polk, hero of the Revolution, banker, and political leader, was born in Mecklenburg County. He was a descendant of Scots-Irish emigrants who went to the Eastern Shore of Maryland in the early eighteenth century. His paternal grandparents were William and Margaret Polk. Thomas Polk, his father, moved to Sugar Creek, near the Catawba, about 1753 and soon married Susanna Spratt, whose parents had recently moved to the area from Pennsylvania. Thomas and Susanna had eight children, of whom William was the oldest. Thomas represented Mecklenburg in the General Assembly and saw service in the Revolution.

William Polk was attending Queen's College in Charlotte when the rebellion against England began, and he was a witness of the Mecklenburg Convention in May 1775. Though only seventeen, he joined a South Carolina regiment as a second lieutenant and fought in the Palmetto state against Tories; he was wounded at the Battle of Canebrake on 22 Dec. 1775. After eleven months of recuperation he was commissioned a major in the Continental service, and in March 1777 he joined a regiment at Halifax and marched from there to join George Washington's forces in New Jersey. In September he fought in the Battle of Brandywine and in October his jawbone was shattered at Germantown. During the winter he was hospitalized at Valley Forge before being sent home to do recruiting during most of 1778 and 1779. The year 1780 found him again on duty in South Carolina, where he participated in the August Camden campaign and the retreat back into his home area and on to Guildford Court House by the following March. By May 1781 he was back in South Carolina, now a lieutenant colonel under Thomas Sumter. He was present at Eutaw Springs on 8 September when his brother was killed.

After the war Polk was a leader in the formation of the Society of the Cincinnati in North Carolina. In 1783 the General Assembly appointed him surveyor general of the district around present-day Nashville, Tenn., and the young veteran moved there to take up his duties. Twice he was elected to represent Davidson County in the North Carolina House of Commons. While in the future Tennessee, he made many contacts and acquired large tracts of land in his own right.

Returning to Mecklenburg in 1786, he represented his native county in the House of Commons in 1787, 1790, and 1791. In the latter year he was Federalist candidate for speaker of the Assembly and was regarded as one of the leading Federalists in the state. In October 1789 he married Griselda Gilchrist, a granddaughter of Robert Jones, Jr., colonial attorney general under Governors Arthur Dobbs and William Tryon. During this period the young couple had two sons: Thomas Gilchrist (b. 1791) and William Julius (b. 1793). The colonel was a trustee of The University of North Carolina from 1790 until his death and served as president of the trustees from 1802 to 1805. In March 1791 he was appointed federal collector of internal revenue for his native state, a job he held until 1808. The first Mrs. Polk died in 1799 and shortly afterwards Polk moved to the state capital. About the same time he was elected grand master of the state Masonic order, serving from December 1799 to December 1802.

During the Jefferson, Madison, and Monroe administrations Polk was a leader of the opposition in North Carolina and a man of growing prestige. Federalists in the Assembly nominated him as their candidate for governor in 1802, but he was defeated by John Baptist Ashe, 103 to 49. He became first president of the State Bank in 1811 and held that post for eight years. When the War of 1812 began, the state's delegation in Congress offered Polk command of a North Carolina regiment with the rank of brigadier general but he declined the honor, being opposed to the war with England as were most Federalists. Only after the British burned Washington did he give up his opposition to the conflict. The wartime governor of the state was William Hawkins, Polk's brother-in-law.

Near the end of the war, in 1814, Assembly Republicans could not agree on a successor to Governor Hawkins and Federalists tried to capitalize on this division and elect Polk. After the Assembly voted, Federalists claimed that Polk received more votes than either Republican candidate but the Republicans quickly combined their count and announced William Miller to be the victor. Polk's supporters believed that the results were fraudulent but were forced to accept the decision.

Honored as Raleigh's most illustrious citizen, Polk was busy with speaking engagements and public meetings during his later years. He was active in the American Colonization Society. A forceful advocate of constitutional reform and internal improvements, he headed in 1826 a company to develop navigation on the Neuse River. Feeling that John Quincy Adams was responsible for the death of federalism, he worked hard to keep Adams out of the White House. He was a leader of the Jackson-Calhoun movement in 1824 and 1828. In 1827 there was another brief attempt to have the Assembly elect him governor. By 1832 Polk developed second thoughts about Old Hickory's dictatorial ways and tried to head off Jackson's choice for his running mate by supporting the Barbour movement against Martin Van Buren.

William Polk died at home at age seventy-five and was buried in the Morgan Street Cemetery. Both North Carolina and Tennessee have counties named for the Revolutionary hero, and in World War I a tank camp outside Raleigh bore his name.