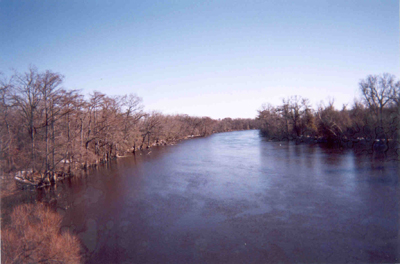 The Neuse River was named by English explorer Arthur Barlowe in 1584 for the Neusiok (meaning ‘‘peace’’) Indians; the Tuscarora Indians called it Gow-ta-no, or ‘‘pine in water.’’ The river’s entire 250-mile length is encompassed by North Carolina; the size of its watershed measures 6,235 square miles. In addition to flowing through seven counties, the Neuse River Basin encompasses 73 municipalities, including Durham, Kinston, Goldsboro, Smithfield, Raleigh, and New Bern. In the early 2000s the region had a population of more than 1.2 million.

The Neuse River has faced various environmental threats, most notably hog waste. Groups such as the Neuse River Foundation continue to work with government and other private groups to ensure the health of the river. Many ancient artifacts have been discovered on the shores and in the waters of the Neuse River, the most notable being the CSS Neuse, built by the Confederate navy, which was burned and sunk in 1865. The remains of the ship were raised in 1963 and are now on display at the Governor Caswell Memorial in Kinston, a North Carolina State Historic Site.

Chris Powell, "The Fight for the River of Peace," Wildlife in North Carolina 63 (November 1999).