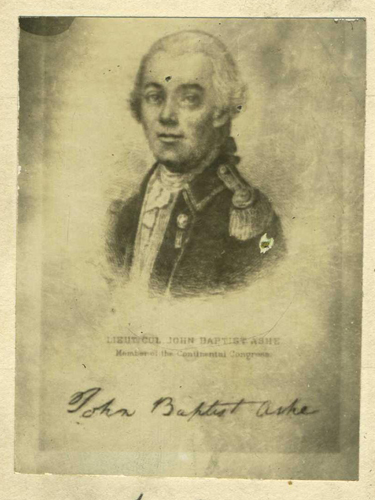 John Baptist Ashe, Continental and U.S. congressman, soldier, and tobacco grower, was born in the Rocky Point district of New Hanover County, presumably at his father's residence, The Neck, on Northeast Cape Fear River. His father, of Wiltshire, England ancestry, was Samuel Ashe, future governor of the state and brother to militia Brigadier General John Ashe. His mother was Mary Porter, cousin to her husband and his first wife. Two younger sons were Samuel, Jr., a captain of dragoons during the Revolution, and Cincinnatus, lost at sea while serving aboard a privateer. Ostensibly christened for John Baptista Ashe, pater familias in Carolina, the grandson elected to drop the final a from his middle name.

J. B. Ashe's emergence into history occurred during the Regulator uprising, when, in May 1771, as a lieutenant in a detachment of New Hanover militia, he and a man named Walker were surprised by the insurgents, tied to a tree, and "most severely whipt with small Hickory Sticks." Ashe served in Colonel Alexander Lillington's militia battalion at the Moore's Creek victory over the loyalists, 27 Feb. 1776, and thereafter he saw continuous service until about a month before Yorktown. He was appointed captain, Sixth Regiment, North Carolina Continental Line, on 16 Apr. 1776, promoted to major of the same regiment on 26 Jan. 1777, and transferred to the First Regiment on 1 June 1778; by January 1780, he was referred to as lieutenant colonel. His commission as major, First Regiment, was signed by John Jay, president of the Congress, in 1779.

Ashe presumably shared the agony of the Valley Forge encampment during the winter of 1777–78. In January 1780 he was the only Continental officer at Wilmington, where he was engaged in assisting brigade chaplain Adam Boyd in procuring shoes for the rank and file. In February 1781, Brigadier General Jethro Sumner gave Ashe the command of a regiment in support of the militia. In the spring and summer of that year he was operating in the Salisbury area under Sumner, who in late July detached him, commanding three hundred newly armed troops, to join Major General Nathanael Greene's forces in South Carolina. On 8 Sept. some four hundred unwillingly conscripted Continentals under Ashe "behaved to admiration at Eutaw, where they almost annihilated a British Regiment," according to Colonel William R. Davie. 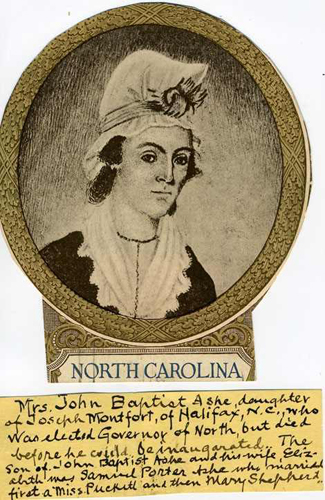 At this point, Ashe resigned from active duty, but the demeanor of a soldier never deserted him. In due course, Military Land Warrant 495 allotted him 4,457 acres on the basis of 65 months' service. He became a charter member of the North Carolina Society of the Cincinnati, founded at Hillsborough in October 1783, with Jethro Sumner as first president. On Sumner's death in March 1785, Ashe was elected to succeed him and presumably held the post until his own demise. An executor of the general's estate, he also acted as guardian, with James Gray, of Sumner's younger children, Jackie S. and McKinney Hurst. On 19 Dec. 1789 the General Assembly appointed Ashe colonel of artillery for the state.

Ashe's entry into state politics began with three terms as a member of the House of Commons for Halifax County, 1784–86. In December 1785 he was appointed chairman of the committee of the whole. In November 1786 he was unanimously chosen speaker on the proposal of William R. Davie, from which it may be inferred that Ashe was of a more conservative cast than the majority of his family. In August of that year, however, James Iredell had deemed him anti-Federalist.

Ashe was nominated a delegate to the Continental Congress in December 1785 but failed of election. On 16 Dec. 1786 he was elected to Congress for the one-year term, along with Timothy Bloodworth, William Blount, Benjamin Hawkins, Alexander Martin, and Thomas Polk. He was in attendance in New York City from 28 Mar. to 10 May and from 13 Aug. to 29 Oct. 1787. His few recorded domestic concerns were the nature of the defenses against the Indians in Davidson County specifically and the western boundaries of North Carolina in general, with special reference to the Hopewell Treaty, and efforts to procure proper duplication of the muster rolls of the North Carolina Line. Foreign matters discussed included the question of American prisoners in Algiers, the affairs of France, and infractions of the peace treaty with Great Britain. His bill to the state for attendance at the Congress is dated Halifax, 30 Nov. 1787. Though named as a state delegate for the congressional sessions beginning in November 1788, he chose not to accept.

At the Fayetteville convention to debate the Constitution of the new United States, in November 1789, Ashe represented Halifax County. When the delegates went into committee of the whole to consider adoption, Ashe presided as chairman, 18–20 Nov. and joined the majority in favoring adoption. He also represented Halifax in the senate in 1789 and on 25 Nov. was appointed speaker pro tem. Five days later he chaired the Finance Committee and in early December signed its recommendation against a bill that would have paid the state's certificates of indebtedness at about one-fifth their face value.

Following North Carolina's admission to the federal union, Ashe was elected to the First Congress as a Republican, or anti-Federalist, representative from Halifax District. His earliest recorded vote at New York came in the second session on 31 May 1790, on the question where to locate the national capital. On 10 Feb. 1791 he wrote from Philadelphia, the new seat of Congress, to his friend Reading Blount, of Beaufort County, that he was opposed to the excise tax on liquor then being discussed. He added that the land office bill also under debate was but a vast lobbying business. Reelected to the Second Congress, Ashe first voted on record during the first session, 14 Mar. 1792. He remained in Philadelphia until at least mid-November that year.

In 1795, the first year of his father's governorship, Ashe represented the town of Halifax in the House of Commons.

On 20 Nov. 1802, Ashe was chosen governor of North Carolina by a large majority in the legislature. When a committee of that body arrived at his Halifax home to declare its action, they found him ill; he died soon after. When his death was formally announced to the senate on 29 Nov., his successor in office, James Turner of Warren County, proposed a thirty-day period of mourning that was unanimously adopted.

On 7 Oct. 1779, Ashe married Elizabeth (26 Feb. 1762–ca. 1 Sept. 1812), daughter of the late Joseph Montfort of Halifax, one-time provincial grand master of Masons in North America, and older sister to Mary Montfort, who became Mrs. Willie Jones. Henceforth, the couple made their home on the southern outskirts of Halifax. Elizabeth became her husband's sole administratrix upon his death.

As of 1785, Ashe owned forty-eight slaves; by the time of the federal census of 1790, the total had risen to sixty-three. The Ashes had one child, Samuel Porter (b. 17 July 1791), who married first Jane Puckett of Henderson, Ky., in 1811, and then Mary, daughter of militia Colonel William Shepperd of Hillsborough; with Mary, he removed to Fayetteville, where he represented Cumberland County in the General Assembly of 1823–25. The couple had two sons and a daughter and eventually settled at Brownsville, Tenn.

Ashe and his wife are thought to be buried in unmarked graves just south of Halifax, possibly in the private burial ground at White Hall (now Glen Ivy) estate. Because they were married by a priest of the Church of England, their religious persuasion was presumably Episcopalian. Portraits of both, miniatures on ivory by an unknown artist, are in possession of Ashe's descendant, Mrs. L. Watson Hall of Little Rock, Ark. Both likenesses were engraved by the Philadelphia lithographer Albert Rosenthal about 1885 and were first reproduced by C. W. Bowman.

Ashe's name is commemorated by Ashe's Island, off Onslow County.

C. W. Bowen, The History of the Centennial Celebration of the Inauguration of George Washington (1892).

General Society of the Cincinnati Archives (Library of Congress), for the North Carolina folder.