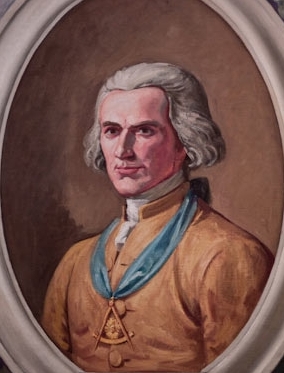 Joseph Montfort [read: Mumford], colonial legislator, public official, and provincial grand master of Freemasons, is said to have been the grandson of Colonel Thomas Montfort of Old Point Comfort, Va. In 1752 he moved to North Carolina and made entry in Lord Granville's land office for 419 acres on Quankey Creek, Halifax (then Edgecombe) County, which was surveyed for him in February 1753. Moving with him from Virginia and settling near him on Quankey Creek were various relatives, including his sister Sarah (1717–1800) and her husband David Stokes (parents of John and Montfort Stokes), and Montfort, Joseph, and John Eelbeck.

Montfort's land entry ripened into a grant on 1 Nov. 1753; two weeks later he married Priscilla Hill, one of the daughters of Colonel Benjamin Hill of Bertie County. By this marriage Montfort gained two influential brothers-in-law: Colonel Alexander McCulloch of Elk Marsh, Halifax County (cousin of the half blood to James Iredell and cousin once removed to Henry Eustace McCulloh), and John Campbell of Lazy Hill Plantation, Bertie County (the rich merchant-planter for whom Governor Arthur Dobbs named the town of Campbellton). Shortly afterwards, Montfort was appointed clerk of the Edgecombe County court. On the division of that county in 1759, he became clerk of the court of Halifax County, then clerk of the Halifax District Superior Court as well. Montfort represented Halifax County in the General Assembly in 1762 and 1764. In the latter year he was, with others of his kin, made a commissioner for the town of Halifax, as well as appointed provincial treasurer for the Northern District of North Carolina. Thereafter he represented the town of Halifax in all five assemblies held from 1766 to 1774. The town elected him a delegate to the Second Provincial Congress (April 1775), but ill health prevented his attendance.

Governor Josiah Martin, when he was engaged in a struggle with Montfort for possession of the land office records of Earl Granville during 1773 and 1774, attributed a most unengaging character to Montfort: "[there is] a certain slyness, and mysteriousness about the man . . . —in short he is a character nobody pretends to understand. He is well received by all, esteemed by very few, and considered a Problem by everybody." These words were written in ill-feeling and must be weighed accordingly. At the same time, however, the motivation behind several important passages of Montfort's life remains shrouded in mystery.

When in the late 1750s a quarrel sprang up between Montfort's brother-in-law, Colonel Alexander McCulloch of Elk Marsh, and Francis Corbin, principal agent in Lord Granville's land office, it would have been logical for Montfort to take up McCulloch's cause. Probably he did. But the fact remains that when McCulloch's extralegal posse seized Corbin in Edenton in January 1759, forcibly brought him to the Enfield jail, and obliged him to post a £2,000 penalty bond to reform the Proprietary land office, Montfort came to Corbin's aid and stood surety for his bond. No doubt it is significant that after Corbin was dismissed from office three months later, Montfort was, in November 1759, given entrée to the land office by his appointment as an entry taker as well as deputy collector of quitrents within the Proprietary. Four years later he became vice-auditor to the Proprietary. It was in the latter capacity that he came into possession of Lord Granville's records, the retrieval of which caused Governor Martin so much trouble. After attempting for a year to detach the records from Montfort's grasp, Martin finally got them by promising in May 1774 to continue Montfort in the office of vice-auditor and, presumably, by acceding to his demand for grants totaling approximately 7,000 acres of choice land. 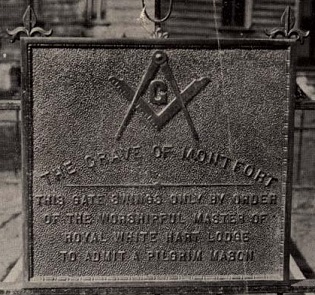 Nor is there a satisfactory explanation for Montfort's opposition to Governor William Tryon during the Regulator campaign. When called upon for funds to outfit Tryon's office, John Ashe, treasurer of the Southern District, had paid the drafts requested by Tryon and, when his funds were exhausted, had issued notes on the faith and credit of provincial revenues. When Tryon drew upon Montfort, however, the northern treasurer is said to have refused to honor the drafts on the grounds that he had no funds on hand for contingencies. Montfort's recalcitrance in this matter may have been grounded in his experience during the 1768 investigation into the production of counterfeit money at New Bern in which James Davis's journeymen printers, Samuel R. Hall and James Mansfield, were involved. Since only the two provincial treasurers (Ashe and Montfort), the master printer (Davis), and his journeymen (Hall and Mansfield) had access to the plates, paper, and press, all came under suspicion. Montfort's enemies promptly mounted a canard against him. Although forced to admit that there was no proof of his complicity in the counterfeiting, they kept alive suspicions against him for the remainder of his life through their insinuations both to Governor Tryon, who perceived Montfort to be opposed to his administration, and to Governor Martin, who felt the effects of Montfort's opposition over custody of Lord Granville's records. Montfort took no public measures to acquit himself, but he is said to have watched for his accusers secretly, having resolved to make them repent their temerity through legal prosecution. As there were no prosecutions for slander, it remains impossible to identify by name Montfort's enemies in the colony or to determine the grounds for their enmity. It is possible that their identity could shed light on the early history of freemasonry in North Carolina.

It is assumed that Montfort was originally a member of a lodge of freemasons operating near the home of Alexander McCulloch of Elk Marsh. The Marsh Store Lodge was organized under the name "White Hart Lodge" but when and under what authority is unknown. When Montfort and his kinsmen and associates decided to take the town of Halifax in hand and make it blossom in 1764, they not only moved into town and built residences there, but they also petitioned for a charter to establish a lodge of freemasons. On 1 Nov. 1764 Cornelius Harnett of St. John's Lodge, Wilmington, issued a warrant of constitution for Royal White Hart Lodge, Halifax, which he signed as grand master. (The assumption is that Harnett held a deputation from Benjamin Smith of Charles Town, who had been inducted as grand master of North Carolina and South Carolina early in 1762.)

At its first meeting in April 1765, the new lodge appointed a committee to meet with a committee from White Hart Lodge at Elk Marsh in order to make equitable division of all monies and matters between the two lodges. (It is probable that White Hart Lodge at Elk Marsh collapsed during the Revolution or sometime thereafter, for in 1794 its treasurer was required to surrender the jewels and apparatus of the parent lodge to the Royal White Hart Lodge in Halifax.) In June 1765 Montfort was elected treasurer, then master of Royal White Hart Lodge; for the remainder of his life he appears to have been preeminent in the life of the lodge. At the end of 1767 the lodge authorized the purchase of elegant glassware from England and four one-gallon punch bowls of Bow china, presumably to be ordered by Montfort on his forthcoming journey with Alexander McCulloch to England. While in England, Montfort secured a new charter for Royal White Hart Lodge under authority of the duke of Beaufort, grand master of England, which he presented to the lodge on his return in May 1768. No doubt the new charter gave the lodge more prestige than the one issued by Cornelius Harnett in 1764. 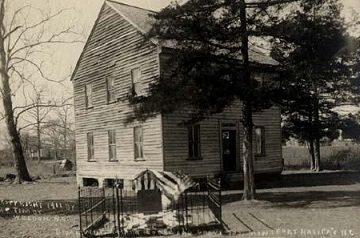 It may have been at this time that Montfort put into motion the machinery for securing for himself a deputation as provincial grand master for North Carolina. The first hurdle was cleared with the deputation of Edgerton Leigh as grand master of South Carolina, publication of which was made on 8 Mar. 1770, for Harnett's deputation would have come to an end with the termination of Benjamin Smith's tenure as grand master of North Carolina and South Carolina. Presumably as a result of a correspondence Montfort initiated with officials in England, he received a deputation as provincial grand master on 14 Jan. 1771. At the critical place for stipulating jurisdiction, his deputation was worded: "Provincial Grand Master of and for America." The phrase "of and for America," rather than "of and for North Carolina in America," led to a rather unnecessary but long-lived debate in Masonic circles. The minutes of the Grand Lodge of England for 6 Feb. 1771 record his deputation as "Provincial G. M. for North Carolina." The fact that Montfort granted a warrant for a Virginia lodge, in the absence of a grand master for that province, does not actually suggest a continental jurisdiction for him. Continental jurisdiction had been attached by the grand masters of England to the grand masters of Massachusetts since 1733, and Massachusetts had exercised the function by warranting over thirty lodges in eight of the colonies between 1733 and the time of Montfort's deputation.

Although the records of the grand lodge established by Montfort have not been recovered (and are not known to have survived), Masonic historians have been able to discover a part of its history. It appears that Montfort created a new order of precedence for the North Carolina lodges and, by so doing, left a controversy that ripened after his death. He issued a new charter to the eleven-member St. John's Lodge at New Bern on 10 Jan. 1772 and is said to have issued a new one to the Royal White Hart Lodge, Halifax, on 10 Mar. 1772. During the next three years Montfort granted warrants of constitution to six other lodges: St. John's, Kinston; Royal Edwin, Windsor; Dornoch, Bute County; Royal William, Winton; Royal Arch, Cabin Point, Va.; and Unanimity, Edenton. It is noteworthy that he seems never to have issued warrants for lodges in either the Piedmont region or the Cape Fear area of North Carolina. This suggests that he was able to extend his jurisdiction only to those counties lying in the northern inner coastal plain, where his personal influence or that of his family connections prevailed. In the absence of evidence, it is unclear whether this fact should be attributed to opposition to Montfort from within freemasonry circles, to his political guile, or merely to his increasingly failing health.

Montfort appears to have suffered from a pulmonary ailment that threatened his life during the winter months. In March 1774 he was declared to be past all hope of recovery, in March 1775 he was again so ill that he was unable to attend the Provincial Congress in New Bern, and in March 1776 he succumbed to his malady.

Montfort's portrait, owned by the Grand Lodge of North Carolina, reveals a handsome, pale man with a penetrating but introspective look and a mysterious half smile on his lips. He was survived by his wife, Priscilla Hill, and three children: Henry, Mary (Mrs. Willie Jones), and Elizabeth (Mrs. John Baptista Ashe).

Thomas C. Parramore, Launching the Craft: The First Half Century of Freemasonry in North Carolina (1975).