Henry Eustace McCulloh, was the only son of Henry McCulloh of Turnham Green, Middlesex, England, the largest land speculator in colonial North Carolina. Henry Eustace entered North Carolina as an infant in 1740 but returned to England in 1747 to be educated. Entering Middle Temple, one of the inns of court, in 1757, he was called to the bar in 1760. He returned to North Carolina the following year with an appointment as collector of the port of Beaufort. In April 1762 he assumed a seat on the royal Council. 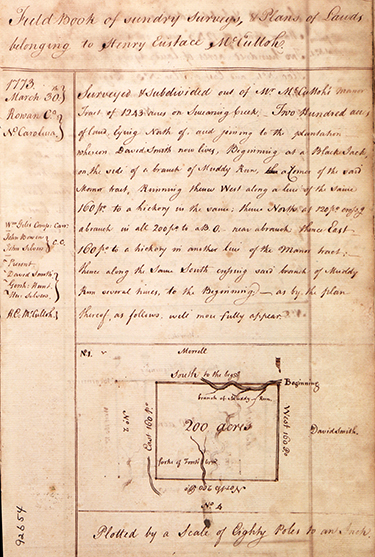 McCulloh served as his father's chief agent and attorney in North Carolina and surveyed many of the tracts in the 1.2-million-acre Huey-Crymble grant, which was in fact controlled by his father. In 1764 Henry Eustace was residing in Orange County and serving as a justice of the peace. There he established a close friendship with Edmund Fanning, the target of so much of the Regulators' hatred. By 1766 he had become collector of the port of Roanoke and was living in Edenton. The following year he returned to England and in 1769 began three years of service as the provincial agent for North Carolina. Henry Eustace resigned his seat on the Council in 1770 because he would not soon be returning to the colony. However, he did come back in 1772 and left the next year never to return. In 1774 he stood for election to Parliament for the borough of Cricklade, Wiltshire, but lost.

With the outbreak of the American Revolution, McCulloh tried to maintain friends on both sides of the Atlantic. To the Loyalist Claims Commission in England he professed his allegiance to the mother country, while in North Carolina (as his son claimed in 1792) he paid and maintained a substitute in the Continental line. Throughout the war and after, Henry Eustace corresponded regularly with such Whigs as James Iredell (his cousin), Cornelius Harnett, and Willie Jones.

McCulloh journeyed to New York in 1778 in the ultimate hope of arguing for his North Carolina holdings but never traveled south. James Iredell pleaded with the General Assembly not to confiscate McCulloh's lands because of his service as provincial agent. Nevertheless, the property was confiscated in 1779. Back in England in 1779, Henry Eustace became attorney for North Carolina Loyalists submitting claims to the Crown. He continued to press his own claims for compensation even more strongly after his father's death that June.

McCulloh's dealings with the Loyalist Claims Commission were frustrating to him. In 1783 he asserted that he held deeds on over 800,000 acres in North Carolina (primarily in Anson, Guilford, and Rowan counties) and had lost over £1,000 in annual revenues from the various provincial offices he had held. The commission eventually compensated him to a total of £12,047, but he had claimed losses nearly five times that figure. McCulloh, greatly dissatisfied with the settlement, continued to try to get more money from the commission but to no avail. Finally his wife, Udell, wrote to the Claims Commission in September 1807 that her husband had become deranged earlier that year and had been confined to an asylum at Clapton. She had had to sell their house at Lincoln Inn Fields to meet expenses.

Henry Eustace's illegitimate son George, a native North Carolinian, had pressed his father's claims in the state almost as avidly as Henry Eustace had done in England. In a petition to the legislature in 1792, he asked that all of his father's lands still unsold be turned over to him based on his nine-month confinement as a prisoner of the British during the war. The General Assembly rejected his request.

Henry Eustace was an urbane man with a taste for high living. His library in North Carolina contained books by Pope, Swift, and Homer. Set against this erudition was his reputation as a notorious womanizer. McCulloh's political duplicity was manifested in his efforts to maintain control of a landed empire in North Carolina (ranging in size at various times from 400,000 to 1.5 million acres) by playing one faction against another. If it had not been for the American Revolution, he might have succeeded. Undoubtedly, that event, which by its sheer enormity voided his manipulative skills, contributed to McCulloh's dying a lonely, broken man in a madhouse.

Robert O. DeMond, The Loyalists in North Carolina during the Revolution (1940).

Haywood, Marshall De Lancey. Governor William Tryon, and His Administration in the Province of North Carolina, 1765-1771: Services in a Civil Capacity and Military Career as Commander-in-chief of Colonial Forces which Suppressed the Insurrection of the Regulators. E. M. Uzzell, printer, 1903. 47-55. http://books.google.com/books?id=MMkBAAAAMAAJ&pg=PA53#v=onepage&q&f=false (accessed July 19, 2013).