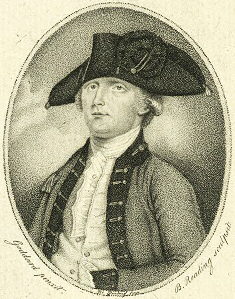 Edmund Fanning, North Carolina loyalist, lawyer and land speculator, colonial official, private secretary to Governor William Tryon in New York, lieutenant governor of Nova Scotia and of Prince Edward Island, and British army general, was born in Suffolk County, Long Island, N.Y., the fifth son of the ten children of British army captain James Fanning of Riverhead, Long Island, and Hannah Smith of Smithtown. He was the grandson of Thomas Fanning of Groton, Conn., and the great-grandson of Edmund Fanning of Kilkenny, Ireland, who had migrated to Pequot (New London), Conn., in 1653, and his wife Catherine Hayes, daughter of Hugh Hayes, Earl of Connaught. The boy Edmund was sent in his ninth year to a grammar school on Long Island and in 1753 to Yale College, New Haven, where he was graduated in 1757 with a B.A. degree, winning sixth highest honors and a Berkeley Scholarship. He immediately proceeded to Harvard College, Cambridge, Mass., where he subsequently earned an M.A. degree. He is also thought to have studied law for a period at King's College (now Columbia University), N.Y., which later awarded him an M.A.

In a "Statement Prepared by Gen. Edmund Fanning" but finished by one of his daughters, he asserted that "in the year 1760 I was elected a trustee and Commissioner of the incorporated Town of Hillsborough, N. Carolina, and one of the two representatives of the County of Orange." From local records it appears that Fanning was elected a town commissioner in 1760 to replace one Daniel Cane (or Kain) and continued in the post for nearly eleven years until his departure from the province in 1771. The Inferior Court Minutes of Tuesday, 19 May 1761, recorded his appointment as "Prosecutor for the Crown," the first preserved official mention of him in the county. Thereafter, valuable appointments and opportunities came swiftly.

Fanning early formed two brief business partnerships. One, with the Virginians Thomas Hart and James Thackston, was called Fanning & Co.; the other, with Francis Nash and John Dowell, was listed as Dowell & Co. In 1762 and again in 1766–68, Fanning sat with Thomas Lloyd of Orange as the two representatives of the county of Orange in the colonial assemblies at New Bern. The "Dear Ned" letters written by land speculator and Selwyn agent H. E. McCulloh to Fanning make it clear that McCulloh had planned to buy Borough status for £10 "as a gift to Hillsborough" to ensure Fanning's continued seat in the Assembly. The borough charter, dated 9 July 1770, was very likely purchased by Governor William Tryon, however; and Fanning, defeated in the regular election, served as the first borough representative for Hillsborough during 1770–71.

He was also appointed on Tuesday, 3 May 1763, as the second public register of Orange County, a key position that he held until October 1768. In 1765 he was appointed judge of the superior court for the Salisbury District. In 1763 he had been given a commission in the Orange Country militia, and in 1767 he was elevated to the rank of colonel for special service in connection with running the Cherokee boundary line. He was also appointed one of a seventeen-member board to establish Queen's College (known in the Revolutionary period as "Liberty Hall") in Charlotte. Fanning was promptly elected president of the fledgling "college," which, his autobiographical memoir states, conferred upon him the M.A. The college is said to have been disallowed in London because of its preponderance of Presbyterian trustees.

From the outset, Fanning had steadily acquired lots in Hillsborough (prompting a waggish correspondent to address his letter to "Fanningsburg") as well as various tracts in Orange, Anson, and Rowan counties. The will of William Churton, probated 5 Jan. 1768, bequeathed him not only Churton's home lots in Hillsborough but also an immensely valuable 1,100-acre tract south and east of the town. Within little more than a decade, Fanning in various ways acquired at least twenty-nine town lots in Hillsborough, Charlotte, Cross Creek (Fayetteville), New Bern, and Salisbury and some 10,485 acres of land in Orange, Anson, and Rowan counties. 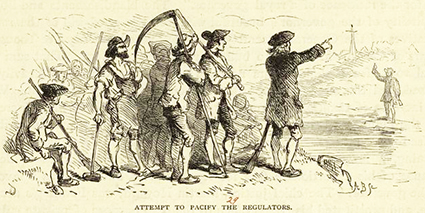 Extreme discontent in the western counties over high fees for registration services as well as over taxes imposed and the sheriffs' high-handed and oppressive collections of them led finally to the widespread, violent disturbance now generally known as the "War of the Regulation." Although the attorney general of the province in London and John Morgan of the Inner Temple ruled that Fanning's registration charges had not been exorbitant (6 shillings for Deed 13 as opposed to the usual charge of 2 shillings 8 pence), the London legal opinion had little weight with Carolina backwoodsmen. Much of the general unrest was animated by the settlers' intense hatred of Fanning himself and by their profound distrust of his intimate friendship with royal Governor Tryon.

In April 1768 a few shots were fired through the roof of Fanning's house by disgruntled Regulators, but in the riots of September 1770 his house was cut from its sills and leveled to its foundations, "every article of furniture destroyed," and his papers and wearing apparel "carried into the street by armfulls and destroyed." Somehow his law office on the opposite side of West King Street was left undamaged. At the same time, the Regulators, armed with wooden cudgels and cowskin whips, overran a session of superior court and physically maltreated various members of the "Courthouse Ring," including Fanning. Subsequently, Fanning requested a corps of militia to suppress the Regulators, and at the ensuing Battle of Alamance on 16 May 1771 he commanded the left wing (some 200 men) of the front line of the provincial forces, successfully led by Governor Tryon.

Shortly afterward he followed Tryon to New York as his private secretary, serving also as surrogate of the city of New York. In 1774 he was appointed surveyor-general of the province of New York by Lord North "in consequence of my losses, sufferings, and services during the insurrection in North Carolina," as his memoir states. The same year, on 6 July, he was awarded a D.C.L. degree by Oxford University, possibly at the recommendation of Lord North, as was another prominent American loyalist, Thomas Hutchinson of Massachusetts, on 4 July 1776. On his final departure from North Carolina Fanning had designated his friend, the Scottish merchant William Johnston, as his "Agent" in charge of his considerable estate. Although Fanning's properties were officially eligible for confiscation after 1779, Johnston did a masterful, sleight-of-hand job of evasion until his death on 3 May 1785, when that portion of the estate still in Fanning's name came into the hands of Johnston's executors. Eleven of Fanning's town lots and a single tract of 300 acres were sold at auction at the confiscation sale on 25 Aug. 1786. The remainder of his large estate had been quietly disposed of long before. For at least thirty years Fanning tried, with the reluctant aid of Tazewell, Wickham, and others, to lay hand on some portion of his vanished North Carolina holdings. In the end, the Loyalist Claims Commission granted him only £3,098.3 on a claim of £17,396.1.

In New York Fanning in 1776 raised and commanded a corps known as the Associated Refugees of the King's American Regiment of Foot, serving as its colonel throughout the Revolutionary War in which he was twice wounded. On the dissolution of his regiment, he was in December 1782 made a colonel in the regular British army; on 24 Feb. 1783, he was appointed councillor and lieutenant governor of Nova Scotia, then a haven for refugee loyalists.

On 30 Nov. 1785, at Point Pleasant, near Halifax, Nova Scotia, the forty-eight-year-old Fanning married Phoebe Maria Burns, a twenty-year-old refugee. They had four children: Louisa Augusta (b. ca. 1787), Frederick Augustus (1789–1812), Maria S. Matilda (b. 1791), and Margaret William Tryon (b. 1801). On 26 July 1786 Fanning was appointed lieutenant governor of Prince Edward Island, a post that he held for nineteen years until his resignation in July 1805 at age sixty-eight. The people of Prince Edward Island, however, had early preferred charges of tyranny against him, but these were investigated and dismissed by the British Privy Council in 1792. Surviving letters indicate that as late as 1814 Fanning was still preparing to answer questions of an investigative board.

Fanning was promoted to major general in the British army on 12 Oct. 1793, to lieutenant general on 26 June 1799, and to general on 25 April 1808. Although he had set up an establishment at No. 57 Margaret Street, Conduit Square, when he visited London in 1806 after his retirement, he apparently did not remove there permanently until 1813. After a period of intermittent "infirmity and low health," he died at his home in Upper Seymour Street at the age of eighty-one, survived by his wife and daughters. Of special interest is the extremely laudatory obituary published in the May 1818 issue of the Gentleman's Magazine.

Fanning's reputation, like Tryon's, has been undergoing a gradual process of reassessment at the hands of research historians, and some of the more extreme Regulator accusations have long since been proved untrue. There can be scant doubt, however, that Fanning's arrogance toward his inferiors and his tendency toward cruelty, felt by nearly every small landowner in the county of Orange, inflamed the Carolina backcountry people beyond endurance—far more than did his six shilling fees, his landed estates, and his political maneuvering.

A likeness engraved by Goddard is reproduced in the American Portrait Gallery, and a similar small picture is preserved in the Preston Davie Collection, Southern Historical Collection, University of North Carolina Library. A family monument at Riverhead, Long Island, lists items in the Fanning genealogy. The subject of this biography is not to be confused with the famous nephew, Captain Edmund Fanning (1796–1841), the explorer and navigator known as "the Pathfinder of the Pacific," for whom the Fanning Islands were named.

"Attempt to pacify the Regulators." Our country: a household history for all readers, from the discovery of America to the present time. (New York : Johnson & Miles, 1877. http://digitalgallery.nypl.org/nypldigital/id?808406 (accessed July 19, 2013).