Thomas Lloyd (or Loyd, Loyde), Loyalist planter and colonial official of Orange County, member of the colonial Assembly, an officer in the Orange County militia, and sometimes accounted the most influential citizen of Orange prior to the Revolution, has long been confused with Colonel Thomas Lloyd, of New Hanover County (died August 1770 and buried in St. James's churchyard, Wilmington), a politically active physician of the 1760s who was nominated by Governor William Tryon to the royal Council. References to the two Thomas Lloyds in William L. Saunders's Colonial Records of North Carolina, Walter Clark's State Records of North Carolina, and other pertinent sources were collected and identified about 1961–62 by the late Robert Bruce Cooke, of Durham, who concluded that existing brief biographies and notices of Thomas Lloyd of Orange County had mistakenly telescoped the lives and political activities of two different men, bearing the same name at the same time but pursuing different occupations and living in different, widely separated counties of the province of North Carolina.

Thomas Lloyd of Orange County, usually designated as Major Thomas Lloyd, was apparently of the third generation of Lloyds and also the third of his name in Prince George County, Va. (a part of which became a part of Brunswick County when it was formed in 1720). The first of the Lloyd family line in Prince George appears to have been Thomas Lloyd, a modest draper or cloth merchant who died before 11 Mar. 1717 and whose will was filed on that date by his widow Jane (or Jean) Mackmahon at a court held at Merchant's Hope Church, Va. The inventory of the Lloyd estate, officially appraised at £59.12.11/2 on 5 Apr. 1718, lists a sizable number of ells and yards of nearly a dozen different kinds of fabrics—dowlas, "blew Linnen," osnaburg, Scotch cloth, duffel, crepe, and the like. Hu (or Hue) Mackmahon of Martin's Brandon Parish, evidently the father of Jane, died at nearly the same time, and his small estate, valued at only £6.18, was included with the appraisal of Thomas Lloyd's possessions since Jane Mackmahon Lloyd was the administratrix of both estates.

The second Thomas Lloyd, son of Thomas and Jane and the father of Thomas Lloyd of Orange County, was an acquisitive man who managed to collect various chattels, slaves, and plantations on the lower side of Sturgeon's Run in Brunswick County. He was able to deed plantations and slaves to two of his children, Elizabeth [Jackson] and John. The third Thomas appears to have secured a land patent of 2,000 acres for himself on 6 Aug. 1747 "including the Plantation he lives on."

This was the Thomas Lloyd (ca. 1710–92) who moved with his family to Orange County either late in 1752 or early in 1753. On 22 Dec. 1752 he sold 995 acres on Lloyd's Run, Reedy Creek, and Sturgeon's Run in Brunswick County to Edmund Tabb and others (deed registered on 26 Dec. 1752), the deed providing, however, that his father be allowed to remain on the property for his lifetime. (According to the evidence of a deed, the older Thomas Lloyd was still alive on 22 Feb. 1757.) Apparently at an early age the third Thomas Lloyd had married one Tabitha, and at least four of their seven children appear to have been born in Brunswick.

In Orange County, Thomas Lloyd promptly entered for two adjoining land grants on "Marks Creek the north side of the Piney Mountain," about three or four miles north of present-day Chapel Hill. The two grants, totaling 783 acres, were issued on 11 and 12 May 1757 and became the nucleus of Lloyd's well-known "Meadows" plantation home, marked "T. Loyde" on the Collet map of 1 May 1770 and "T. Loyd" on the Mouzon map of 1775. The first Orange County tax list of 1755 lists "Thomas Loyd" and two Negroes.

Lloyd appears to have been an aggressive, shrewd man of moderate education, great energy, considerable political sagacity, and attractive personality who rapidly became a powerful figure in Orange County politics. On 12 Mar. 1754 he was appointed a commissioner of roads in place of Mark Morgan (who did not appear in person to qualify) and was reappointed in 1756 and 1757. On 12 Apr. 1755 Lieutenant Colonel Josias Dickson recommended that Lloyd and John Patterson receive captain's commissions in the regiment of Orange County militia, again to replace Mark Morgan who had not appeared to qualify and whose company was found to be too large. In June 1757 Lloyd also qualified as a justice of the peace for the county; thereafter, he sat regularly, sometimes as chairman, on inferior courts, deciding and guiding the affairs of the vast new county.

As a justice, Lloyd took an interest in the two primitive county structures erected at the county seat (Corbinton, later renamed Childsburgh and then Hillsborough) and in June 1758 "viewed the Prison of this County" to put it in "good and sufficient repair." Later he served on a committee to build a new county jail. In September 1759 the court ordered Lloyd to "agree with some proper Person for four Barrells of Tar & [to] put it on the Courthouse to Preserve it from the Inclemency of the Weather."

On 31 Mar. 1761 he took his seat with surveyor William Churton as one of the two representatives of Orange County in the Provincial Assembly at New Bern, a position he occupied until 1768. It is clear that from 1761 onwards, Lloyd was one of the accepted inner circle of Orange officials sometimes called by the Regulators "the Courthouse Ring." The county court offered his name to the governor as a candidate for high sheriff no less than three times—in May 1761, May 1765, and May 1766. Lloyd is known to have been high sheriff in March 1775, and it is likely that he had served in the late 1760s (court records are missing for the period).

Apparently, Lloyd was also chairman of the vestry of the Parish of St. Matthew, then coterminous with Orange County; at least his name appears first in the list of seven vestrymen writing to the bishop of London on 29 Mar. 1769 to recommend the ordination of Edward Jones. (Lloyd had been a trusted member of the Parish of St. Andrews in Brunswick County, Va., appointed on 8 Nov. 1751 to "do procession"—that is, trace out the boundaries of the parish.)

Thus, in a relatively short time Thomas Lloyd had in Orange County acquired a half-dozen interlocking positions of administrative power in church, court, militia, and provincial government. In addition, two of his sons-in-law, Colonel John Hogan of Orange and Adlai Osborne of Rowan, were among the most consequential men of the backcountry and shed considerable luster on the Lloyd family prestige.

Throughout these years, Lloyd and his oldest son Stephen built considerable estates both by land grant and purchase. The second preserved Orange County tax list, that of 1779, shows Thomas Lloyd's assessed worth in that year to have been £10,871 and Stephen's, £7,065.8.

The Orange County court minutes and Saunders's Colonial Records steadily record Thomas Lloyd's faithful service to the local representatives of the royal government—going on personal bonds for Edmund Fanning and Francis Nash and mustering out volunteers at Colonel John Gray's command to deal with Regulator disturbances. On 27 Apr. 1768 Governor William Tryon sent personal compliments to Lloyd for his efforts.

On 10 Oct. 1766, however, Lloyd, like the other courthouse officials, failed to keep stated agreements and promises to put in an appearance at a scheduled meeting of the Regulators at Maddock's Mill "where there is no Liquor" and thereby roused distrust among the backcountry men. On 1 May 1768 he took an action that particularly angered Regulator leaders and incurred their lasting hostility. After Secretary Isaac Edwards's conciliatory address intended to mollify a mob and save Hillsborough from a threat of fire, Lloyd as magistrate unexpectedly issued a warrant for the arrest of Herman Husband under cover of night and on 2 May formally made out papers committing him to the jail at New Bern. Although Husband was finally released on bail, the Regulators never forgave Lloyd for what they considered an act of duplicity.

Specific formal complaints of the Regulators against Lloyd began to mount—as to the way he and Justice Tyree Harris had selected a jury and as to the way the accounts of the vestry of St. Matthew's had been handled for the past ten years. In the September riots of 1770, Lloyd, Nash, and three other county officials had to flee to the surrounding woods to escape the kind of physical maltreatment inflicted on Edmund Fanning. Nevertheless, Lloyd appears to have been appointed coroner of Orange in the early summer of 1772 and high sheriff in 1774–75.

Lloyd virtually vanished from public view after the Revolution (in which he did not serve in any capacity). His steadfast loyalty to the British monarchy and its local representatives had placed him in a difficult and equivocal position even with his neighbors. 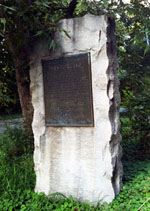 It should be noted that Lloyd was the only member of the Courthouse Ring who remained in the Hillsborough area throughout the Revolution. It is also noteworthy that Fanning did not attempt to make use of Lloyd's name as a cover for the conveyance of his own deeds in 1775.

Orange County deed books reveal Lloyd's efforts to stave off possible confiscation of his property. On 23 Oct. 1786 he conveyed to his son-in-law Daniel Hogan for 5 shillings "current money," two Negroes, and all his household and plantation furniture and livestock, all of which Hogan leased back to him on the same day for an annual rental of sixpence sterling. Lloyd made an identical arrangement with Colonel John Hogan relative to the two Meadows plantations and five Negroes; the lease agreement was dated 23 Oct. 1786 and again the yearly rental was sixpence sterling. Lloyd's lands and property were never confiscated.

No portrait of Lloyd is known to exist, but family tradition describes him as having had an impressive appearance, "athletic and strong." He died shortly after his son Stephen was said to have been shot to death on his own plantation by a slave named Isaac. Thomas Lloyd is thought to have been buried with three other members of his family approximately fifty yards east of his farmhouse. The graves, reportedly marked only by rough fieldstones, have not been located.

On 6 Oct. 1937 the Thomas Lloyd Memorial Association erected an imposing memorial stone with bronze plaque in Lloyd's honor on old Highway 86 north of Chapel Hill near the Lloyd homesite. The memorial plaque, however, also incorporated data from the life of Thomas Lloyd of New Hanover County.

Eugene Sugg, Sketches of Major General Thomas Lloyd of Orange County, North Carolina, and Some of His Descendants (1931).