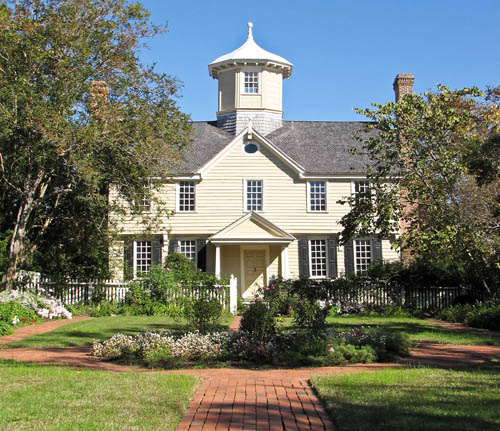 Francis Corbin, council member, judge of the court of admiralty, associate justice of the general court, legislator, colonel of the militia, county justice, and agent and attorney to John Carteret, Earl Granville (proprietor of the northern counties of North Carolina), was born in Great Britain of unknown parentage. The rumor current in mid-eighteenth-century North Carolina that he was a natural son of Earl Granville appears to have been without foundation in fact. Corbin seems, however, to have had some claim to the earl's favor and patronage, and he remained intimately concerned in Granville's North Carolina proprietary affairs from 14 Nov. 1744 until 25 Apr. 1759.

The charter granting most of the northern half of the colony to Earl Granville (the only one of the Lords Proprietors of Carolina who declined to sell back to the Crown his share of the original 1663 grant) was perfected on 17 Sept. 1744. Two months later, Granville sent Corbin to America with the original of the new proprietary charter, an office copy of his surrender of claim to the remaining seven-eighths of the original territory of Carolina, printed exemplifications of each, packets for the governors of the two Carolinas, and instructions for Edward Moseley, who had since 1 Sept. 1740, served as the Earl's agent in revenues from quitrents. It was made clear in Granville's instructions to Moseley that Corbin was to be given responsibilities in the conduct of proprietary affairs, but the earl's intentions appear to have been ignored by Moseley, who preferred to share his duties with Robert Halton. In any event, Granville had provided Corbin with neither a commission nor a power of attorney. Consequently, Corbin found himself without immediate employment in North Carolina. Whether he is to be identified with the Francis Corbin who advertised himself as a teacher of reading, writing, and arithmetic in the 16 Dec. 1745 South Carolina Gazette remains doubtful.

A hiatus in the proprietary correspondence for this period prevents certain knowledge, but Corbin must have appealed to his patron. At any rate, when Granville named commissioners on 5 Sept. 1746 to act for him in surveying the extension of the southern boundary of the proprietary, Corbin was added to the list otherwise comprised of Moseley, his family connections, and his political associates: Robert Halton, Roger Moore, Matthew Rowan, James Hasell, James More, and John Swann. This association with political opponents of Governor Gabriel Johnston may account in part for Corbin's subsequent opposition to the governor. Shortly after the extension of the southern boundary was surveyed, Corbin returned to London and there, in 1748, joined anti-Johnstonian forces seeking the governor's removal. The strongest part of Johnston's London-based opposition was made up of Henry McCulloh, the land speculator, and his associates Arthur Dobbs, Jeremiah Joye, and Samuel Smith. Acting upon information received from Moseley, Corbin and his later associate in Granville's proprietary affairs, Thomas Child, added their testimony to charges against Johnston of maladministration and disloyalty to the Crown. By the summer of 1749 the charges had come to naught, Moseley and Halton had died, and Corbin and Child were still in London.

In October 1749, Granville commissioned Child and Corbin his proprietary agents and gave them powers of attorney for North Carolina; both men returned to the colony, set the proprietary affairs upon a business footing, and opened the land office in Edenton in October 1750. Shortly thereafter, Child returned to London. Though Corbin was joined in the performance of his commission successively by James Innes (1751–4), Benjamin Wheatley (1754–6), and Joshua Bodley (1756–59), he remained the principal proprietary agent resident in the colony during the following decade.

By virtue of his commission as proprietary agent, Corbin was given appointments in the colony's royal government. He was simultaneously a member of the governor's council, judge of the court of vice admiralty, an associate justice in the colony's general court system, colonel of the Chowan County militia, and a justice in Chowan's court of pleas and quarter sessions. Though he subsequently fell into disfavor with Governor Arthur Dobbs and was removed from his various offices, Corbin appears to have performed his governmental duties well. His proprietary duties, however, were allowed to suffer neglect.

Corbin's conduct as agent to Earl Granville came under contemporary fire, and as principal resident agent he probably should be held accountable for the abuses practiced on the earl's tenants. There is no evidence that Corbin defrauded the proprietor, but he was unhappy in his choice of proprietary underofficers. His lieutenants charged excessive fees and made illegal and arbitrary decisions regarding disputed land claims; business was so ill-attended that the procedure of granting the land to tenants, which should have taken from six to twelve months, was not infrequently dragged out for six to twelve years. The tenants' ill will toward the proprietary underofficers was eventually extended to Corbin. Moreover, Corbin came under the displeasure of persons of consequence in the colony. He incurred the wrath of Governor Dobbs by reporting to Earl Granville (not only the proprietor but also one of the principal secretaries of state and a member of the Privy Council) that the governor had illegally granted proprietary lands. Corbin next greatly offended the colonial connections of the land speculator Henry McCulloh, by issuing patents for land situated on a tract of nearly three hundred thousand acres within the proprietary reserved to McCulloh by treaty with the earl. Matters came to a head in January 1759, when Colonel Alexander McCulloch, with an extralegal posse from Halifax, Edgecombe, and Granville counties, seized Corbin in Edenton and forcibly carried him off to Enfield; there he and his coagent, Joshua Bodley, were held under armed guard and obliged to give bond for the reformation of the proprietary land office. The Enfield Riot, as it came to be called, was fraught with disastrous results for Corbin. He was unsuccessful in his attempt to bring the ringleaders to justice and was, in addition, stripped by Dobbs of all Crown offices in the colony except his seat on the governor's council. After Earl Granville removed his protection and revoked his power of attorney to Corbin on 25 Apr. 1759, Dobbs removed him from the council as well.

That Corbin stood for election and was immediately returned a member of the General Assembly from Chowan County may serve as an indication that his reputation was not materially touched in his home county. As a member of the assembly he joined with principal proprietary agent Thomas Child, Robert Jones, proprietary collector of quitrents, and former proprietary collector Thomas Barker in opposing the administration of Governor Dobbs. From April 1760 through May 1765, Corbin represented Chowan County in the General Assembly. On 19 Mar. 1763 he was restored by Dobbs to his position as a justice in the colony's highest court of law, with a commission as associate justice on the bench of the Edenton District Superior Court. After the death of Dobbs, Governor William Tryon proposed in 1766 to readmit Corbin to the governor's council, but Corbin's death a few months later intervened.

In 1761, Corbin married Jean Innes, widow of Colonel James Innes; from about 1764, the couple appear to have lived mostly at the Innes plantation in New Hanover County. There Corbin died and was buried sometime between 16 Jan. and 7 Apr. 1767. He was survived by his widow and by a kinsman traditionally spoken of as his brother, Edmund Corbin. The widow's administration of Corbin's estate appears to have been unsatisfactory, and after her death further administration of his estate was granted first to Edmund Corbin in 1775 and subsequently to Thomas Craike in 1783.

Though the town originally called Corbinton in his honor was eventually renamed Hillsborough, Corbin is still memorialized in the name of Corbin Street, Salisbury. His town house in Edenton, the Cupola House, is a reminder of the elegant taste of this controversial colonial figure.