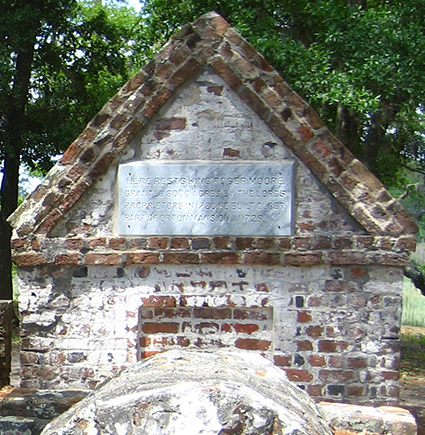 Roger Moore, colonial official, was born in the Goose Creek section of Berkeley County, S.C., one of ten children of the prominent planter James and Margaret Berringer Moore, the stepdaughter of Sir John Yeamans. One of his brothers, James, served as governor of South Carolina. As befitted his station in life, Roger married a daughter of William Rhett, a leader in South Carolina society.

In 1724 Roger Moore began taking a notable interest in development of the Lower Cape Fear region of North Carolina, joining with his brothers, Colonel Maurice and Nathaniel, to seek land grants in the area. By 1727 Roger had accumulated more than seven thousand acres and had built a fine plantation house called Kendall on the Cape Fear River; four years later he owned nearly twenty-five thousand acres. Moore was instrumental in the establishment of Brunswick town and was a staunch supporter of that community in its struggle with Newton (later Wilmington) for supremacy as a port of entry on the Cape Fear. As a member of the royal Council, he engaged in the fierce political intrigue that surrounded this matter in the late 1730s.

Moore held a number of provincial and local offices in the colony. He was assistant justice of the General Court in 1732, a justice of the peace for New Hanover County in 1734, a commissioner for the boundary with South Carolina in 1735, and a member of the royal Council from 1734 until his death. Because of his grand manner and his reputation as a generous host, Moore was often referred to as "King Roger." By 1748 he had built a one-story plantation house called Orton at a magnificent site overlooking the river near Brunswick town. He was buried on the grounds.

At his death in 1751 (his will was probated in May), Roger owned more than 250 slaves and nearly 60,000 acres of land. He was survived by his wife and five children.