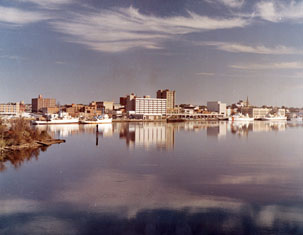 Wilmington is situated between the Cape Fear River and the Atlantic Ocean in New Hanover County. It was known as New Liverpool, New Town, and Newton before being incorporated as Wilmington in 1739-40, named in honor of Spencer Compton, earl of Wilmington, who was a patron of Gabriel Johnston, North Carolina's royal governor at the time.

In 1765 Wilmington was the scene of the American colonies' first successful armed resistance to the Stamp Act. During the Revolution, local Patriots, called Sons of Liberty, butted heads with local Loyalists, many of whom were Highland Scots. In January 1781 Wilmington was occupied by British forces commanded by Maj. James Henry Craig, who used the city as his headquarters while orchestrating skirmishes in the region. In April 1781 he was joined by Lord Charles Cornwallis, who later that month left Wilmington on his fateful march to Yorktown.

From the Revolutionary War through the first few decades of the nineteenth century, Wilmington was a backwater town. Antebellum growth was hampered by a paucity of good roads via which to bring produce to the little port. Thanks to a series of navigational improvements to the Cape Fear River and the city's ports during the mid-nineteenth century, and the invention of steam-powered vessels and railroads, Wilmington began to enjoy steady growth, with exports moving through the port far exceeding imports. Rice, peanuts, flax, cotton, and, most important, naval stores left the banks of the Cape Fear River for destinations all over the world. During this time, Wilmington also became the terminus of the Wilmington & Weldon, Wilmington & Manchester, and Wilmington, Charlotte, and Rutherford Railroads.

At the outbreak of the Civil War, the port suffered from losing its export trade, but within a short time it more than made up for it by becoming a home port to the lucrative blockade-running business. Functioning as "the lifeline of the Confederacy," the blockade-runners brought into Wilmington the military armaments and supplies needed to fuel the Confederate army. The town's official status changed from town to city in 1866. Wilmington's river- and railroad-related businesses continued to grow throughout the nineteenth century. Prosperity was apparent in street and wharf improvements and the construction of fine homes, churches, and public buildings. 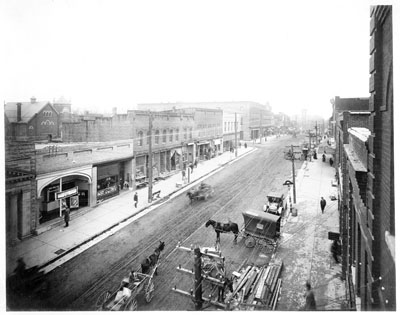 The 1940s and the Second World War brought an influx of newcomers and a renewed energy to Wilmington. The North Carolina Shipbuilding Company employed thousands of workers who delivered 243 new ships for the war effort. In 1945 the North Carolina legislature approved the State Ports Authority, which provided support for transforming the World War II shipyard into a first-class port facility. In 1947 access to higher education became a reality when Wilmington College, now the University of North Carolina at Wilmington, opened its doors. In 1948 several community leaders organized the first North Carolina Azalea Festival, which continues to be a much-heralded and well-attended spring event.

In 1961 the USS North Carolina, the only American battleship to take part in all 12 major naval offensives in the Pacific during World War II, was berthed on the west side of the Cape Fear River across from the central city. A strong historic preservation movement, initiated in the 1970s, brought much of the old town back to its former elegance, and tourism began to flourish. In 1984 a major movie company constructed a 32-acre film studio within the city limits, boosting the local economy and prompting some to tout Wilmington as "the Hollywood of the East." In 1990 Interstate 40 was completed, linking Wilmington and its port to the rest of the state and nation. During the 1990s Wilmington became one of the fastest-growing cities in the nation. In 2005 Wilmington had a population of around 100,000, making it North Carolina's ninth-largest city.