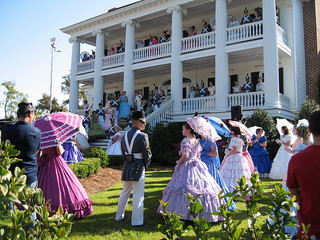 The North Carolina Azalea Festival is held every April in Wilmington as a celebration of the beauty of the abundant azalea flowers in the vicinity. In the 1930s Houston Moore, interested in the beautification of Wilmington's Greenfield Lake and Park, suggested to civic organizations that a "festival with pageantry and color" be established. Municipal officials secured support from the New Deal's Works Project Administration for the beautification of the lakeside park, and when it was completed, upkeep was turned over to civic leaders. By 1937 the city government of Wilmington had accepted responsibility for the park. Ten years later, the idea for an extensive festival arose, and the organizers incorporated. The first Azalea Festival was launched in 1948 with a parade, dance, community sing, and flower show. A motion picture star, Jacqueline White, served as the festival's "queen," and about 60,000 people attended.

The Azalea Festival soon expanded to include such attractions as concerts, tours of local houses and gardens, and a street fair on the Cape Fear River waterfront. Movie actors, musicians, and other celebrities have attended the festival as honored guests, including Ronald Reagan, who was master of ceremonies in 1958. Other famous entertainers featured at the festival have been Andy Griffith, Michael Landon, Frankie Avalon, Pat Boone, Bob Hope, Barbara Mandrell, and Wayne Newton.

By 2006 the North Carolina Azalea Festival was attracting more than 300,000 people annually and generating more than $5 million for Wilmington and surrounding areas.