by David Stick and John Hairr 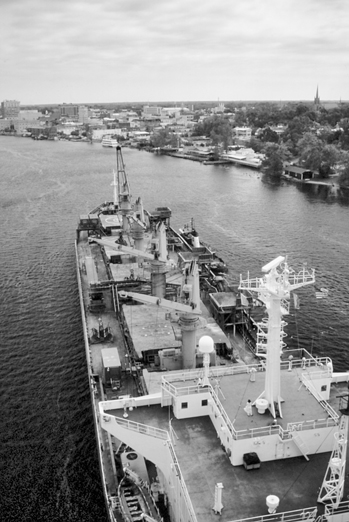 Beginning in the colonial period, North Carolina's ports of entry were settlements where a vessel's cargo could be checked by a government inspector and import fees collected. The ports were essential elements in developing the early commerce of the colony. From the time the first permanent residents started settling in the area north of Albemarle Sound, there were ongoing efforts by the successive governments-first the Lords Proprietors, then the British Crown, and finally the state of North Carolina-to provide aids to navigation throughout the region's vast network of inlets, sounds, and rivers.

Initially, most of the ships entering or leaving the new colony passed through Roanoke Inlet opposite Roanoke Island. Consequently, in 1676 the Lords Proprietors issued instructions to their representatives there to establish three towns, which were to be "the port towns of your county of Albemarle." The first of these, on Roanoke Island, was to be "the Cheife towne and the place where the Councell assemble should meete." The second was to be located on the Perquimans side of Little River and the third at the western end of Albemarle Sound between the Roanoke and Chowan Rivers.

These instructions appear not to have been followed, but for most of the colonial period there were five official ports of entry, although they were of varying degrees of importance. The ports were designed to serve maritime traffic throughout the colony, from Virginia to South Carolina.

Port Brunswick covered the Cape Fear River area, with the port collector located in the town of Brunswick below Wilmington. Port Beaufort handled the commerce through Topsail Inlet near Cape Lookout. Port Bath, situated in the town of Bath on a tributary of the Pamlico River, was where boats entering through Ocracoke Inlet were supposed to go for clearance, while the collector's office for Port Roanoke, which served most of the Albemarle settlement, was actually located in Edenton. Finally, Port Currituck, established to serve commerce through Currituck Inlet, was a port in little more than name, for by the time it was established the inlet had shoaled so seriously that only small vessels could navigate the ever-changing channel. Even then it was difficult to find the port inspector, since his office was wherever he happened to be at the time. 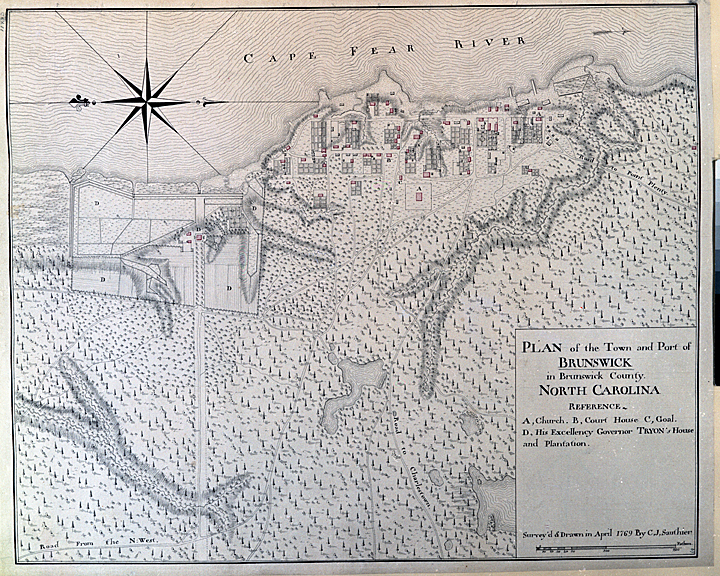 By the early nineteenth century, both Roanoke Inlet and Currituck Inlet had closed, and although Port Currituck no longer existed, there was as much business as ever at the office of the collector for Port Roanoke in Edenton. By that time the only navigable inlet through the Outer Banks was Ocracoke Inlet, located between Ocracoke Island and Core Banks. This meant that all vessels bound to or from the Pamlico or Albemarle Sounds and their tributaries had to pass through Ocracok Inlet. There was an unsuccessful effort to do away with the port collectors' offices at Edenton and Bath and establish a new one at Ocracoke Inlet to serve all of northern North Carolina.

Although the importance of the ports lessened with the gradual shift from maritime traffic to railroads and highways, North Carolina continued to maintain and improve its ports. In 1923 Governor Cameron Morrison became interested in developing a state port facility. He was instrumental in the creation of the State Ship and Water Transportation Commission (SSWTC), whose purpose was to study the possibility of establishing docks, wharves, terminals, and other facilities to promote waterborne commerce. The SSWTC reported that development of such facilities was not only possible, but also would be beneficial. The Ports Commission, which replaced the SSWTC in 1924, was given the task of establishing port facilities for seagoing vessels. A statewide bond referendum for $8.7 million to develop the facilities was placed on the ballot in November 1924 but failed to pass. Lacking funding to accomplish its task, the Ports Commission ceased to exist.

Despite the absence of a state port program, Wilmington and Morehead City continued efforts to improve their respective facilities. To boost these local movements, the General Assembly created the Morehead City Port Commission in 1933 and the Wilmington Port Commission in 1935. In 1945 it established the North Carolina State Ports Authority, with responsibility for developing and improving harbors at Wilmington, Morehead City, Southport, and anywhere else that would benefit waterborne commerce. Construction of state port facilities at Morehead City and Wilmington began in 1949 with the appropriation of $7.5 million and was completed in 1952. Located along the Newport River and Bogue Sound, the original facilities at Morehead City included a 2,500-foot wharf, two transit sheds totaling 92,000 square feet, two storage warehouses with a capacity of 176,000 feet, and a paved open storage area of 60,000 square feet. The State Port at Morehead City was officially dedicated on 14 Aug. 1952.

Historically, the State Port at Morehead City has handled a wide variety of cargoes, but it is best known for moving unmanufactured tobacco, phosphate, and wood chips. As a result of extensive dredging, Morehead City has the distinction of possessing one of the deepest harbors along the Atlantic Coast.

The State Port at Wilmington, located 26 miles up the Cape Fear River from the Atlantic Ocean, saw its original facilities dedicated on 18 Sept. 1952. They consisted of a 1,510-foot wharf, two transit sheds with a capacity of 158,000 square feet, and a storage warehouse of 86,100 square feet. There were three acres of paved, open storage. The port has experienced steady growth, and its primary exports have been forest-related products.