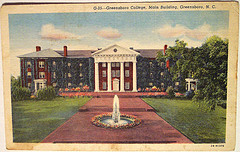 Greensboro College was chartered in 1838 by the Methodist Church as Greensboro Female College. Among its founders was Peter Doub, who was a prominent Methodist minister. It was the first chartered college for women in North Carolina and the third such institution in the United States. The first students entered in 1846 after the completion of a building that stood on the site of the current main building. The original building was destroyed by fire in 1863, forcing the college to close for ten years. In 1873 the college opened its doors in a new building, but by 1903-when Greensboro's Lucy H. Robertson had become the first woman president of a college in North Carolina-the trustees had decided to close Greensboro Female College and sell its assets. However, thanks to the efforts of Robertson and alumna Nannie Lee Smith, $25,000 was raised to keep the college afloat.

In 1912 the school's name was changed to Greensboro College for Women, and in 1913 the first bachelor's degrees were conferred. In 1919 the name was again changed, this time to Greensboro College. By the time of its centennial celebration in 1938, Greensboro College had reached a record enrollment of 400 students. In 1941 another major fire occurred when the main building was hit by lightning and partially destroyed. It was soon restored and remains Greensboro College's primary edifice facing West Market Street near downtown Greensboro, where it serves as an administrative center.

In 1954 Greensboro College began to admit men, making it one of the first women's colleges in the nation to do so. In 1968 Greensboro College joined with Guilford and Bennett Colleges as a part of the Greensboro Tri-College Consortium. Cross-registration enables students to take courses at colleges in other locations in Guilford County as well as at Elon University and Salem College.

By the early 2000s Greensboro College had an enrollment of more than 1,250 students served by 105 faculty members, with majors in 22 areas. The school is also a fully accredited teacher training institution.

Samuel B. Turrentine, A Romance of Education: A Narrative Including Recollections and Other Facts Connected with Greensboro College (1946).