Reprinted with permission from the North Carolina Music Hall of Fame, 2010. Updated by the Government & Heritage Library, 2012. 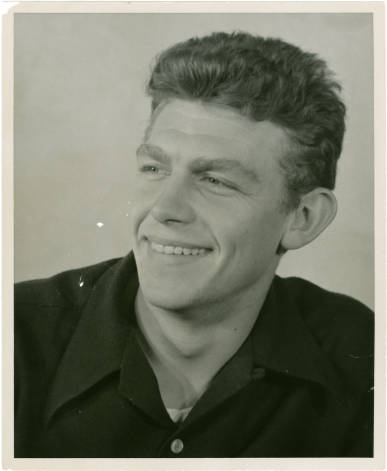 Andy Griffith is one of the most beloved actors in American entertainment; although “The Andy Griffith Show” stopped production in 1967, the show remains on the air as a favorite of each succeeding generation.

Andy Griffith was born in Mount Airy, North Carolina on June 1, 1926. He began acting in high school plays and learned to play the trombone. After high school he enrolled at the University of North Carolina at Chapel Hill intending to become a preacher, but changed his major to music and graduated in 1949. During the next several years, Griffith taught English at Goldsboro High School in Goldsboro, North Carolina.

Andy Griffith began to write and hone his comic skills- – “What It Was, Was Football” was released as a single on Colonial Records in 1953, then picked up by Capitol. It became a huge hit, reaching number 9 on the Billboard Hot 100 chart in 1954.

In 1960 he played a county sheriff in the Danny Thomas sit-com, “Make Room for Daddy,” which led to his starring role as Sheriff Andy Taylor on “The Andy Griffith Show” which aired on CBS.

In the show, set in Mayberry, a fictional town modeled after Griffith’s home town of Mt. Airy. Andy played a widower with a young son named Opie, played by Ron Howard. Co-starring in the show as Deputy Barney Fife was Don Knotts. Others who starred on the show included Frances Bavier as Aunt Bee, George Lindsey as “Goober” and Jim Nabors as “Gomer.”

The show was an immediate hit and Andy Griffith worked as a writer on each of the scripts, although he never received writing credit. 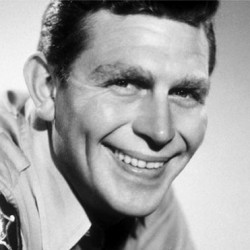 In 1967, Griffith quit the show, and started his own production company, Andy Griffith Enterprises in 1972. After starring in several unsuccessful television pilots he struck gold as country lawyer Ben Matlock in the hit legal drama “Matlock” which aired from 1986 until 1995.

A talented singer, Andy Griffith recorded "I Love to Tell the Story: 25 Timeless Hymns” for Sparrow Records in 1996; which went on to sell over a million copies.

In a recent interview he was quoted as saying, “During all the years of the old Griffith show I tried to talk them into filming in North Carolina, but they said, ‘Why? They already think you’re in North Carolina anyway.’