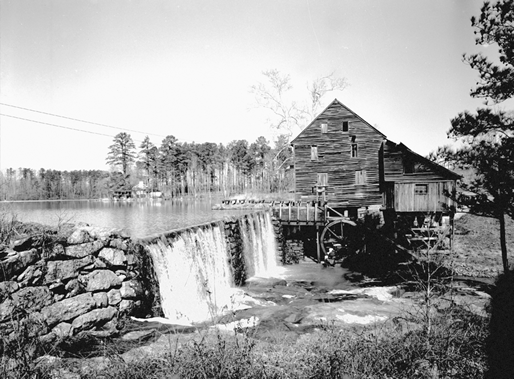 I purchased a postcard of

I purchased a postcard of Grantham & Sons Grist Mill, North Carolina recently. I cannot figure out where in NC this mill is located. Anyone know?

I am looking for information about a mill on Newport River in Carteret county. I was told it was on the Hardesty Farm property. We have purchased several tracts of that farm and would like to know about the mill. Any guidance would be appreciated.

Answering my own question

Answering my own question about wind-powered gristmills on the OuterBanks:
https://villagecraftsmen.blogspot.com/2017/10/windmills-on-outer-banks.html

Just now the Ocracoke Preservation Society posted these photos of a millstone there on the Island. It's hard for me to imagine a gristmill there as there is no elevation and no appreciable flow in the creeks there. But some have suggested that windmill gristmills might have been on the Outer Banks. This seems farfetched based on what little I know (and have now read) about NC gritmills, but I'm open to new information. Any evidence of milling on OBX? Or should we assume that these are decorative imports from somewhere on the mainland?
https://www.facebook.com/opsmuseum/photos/a.129077253796370/229652126371...

Outer Banks mills were wind mills. Or so I have heard.

Since I retired I am

Hi,
I am looking for any information about a mill that would have been located in the Haws Run section of Onslow County, NC. My mother was from that community, and I know very little about the mill, except that the millpond used to be visible from the Haws Run Road off NC 53, and my mother's brothers used to swim in the millpond. (Girls not allowed.) She was born there in 1928.

Hi, there - I'm looking for

Hi, there - I'm looking for mills in Harnett and Cumberland counties particularly owned by the Matthews. Many thanks!

Thank you for your comment! I am forwarding your inquiry to our library's Reference Team who can assist you further. A member of our staff should be reaching out to you via e-mail soon!