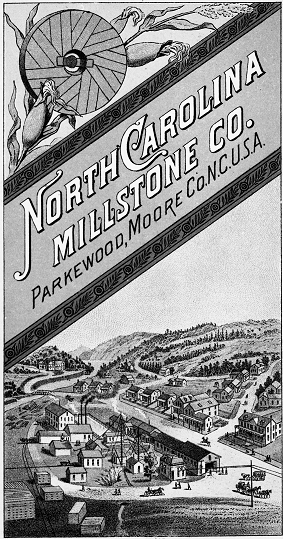 Millstones of large diameter used for grinding cereals, ores for paint, fertilizers, and other products have been quarried from a variety of rocks in North Carolina since colonial times. In Moore County a quartz conglomerate from Parkwood was an important source. The Smith granite quarry near Charlotte was worked for millstones that were used in early ore mills. Triassic sandstones were used for millstones and whetstones. During the twentieth century, most millstones were from Rowan County granite, and as recently as 1953 they continued to be used in the preparation of paints, fertilizer, and feldspar.

Hockensmith, Charles D. The Millstone Industry: A Summary of Research on Quarries and Producers in the United States, Europe And Elsewhere. Jefferson, N.C.: McFarland & Co, Inc., 2009.