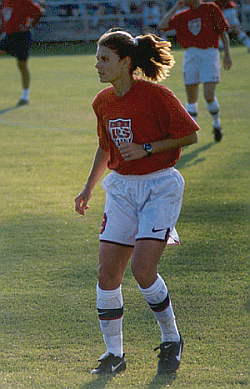 A native of Alabama, Mia Hamm made her mark in North Carolina during her years with the UNC women's soccer team (1989-94). She helped them to win four of their record twenty NCAA championships. During her 17 year career, she scored 158 international goals (the most of any player, male or female), played in 275 international games, and was instrumental in the 1991 and 1999 World Cup wins for the US National Team, as well as helping to win two gold medals in the 1996 and 2004 Olympics.

Since her retirement in 2004, Hamm has been active in the Mia Hamm Foundation. She was inducted into the National Soccer Hall of Fame in 2007.

this needs more info because

this needs more info because it does not tell enough.

Thanks for visiting this entry and sharing your comment.  We will look into supplementing the entry.

Thanks for visiting this entry and taking a minute to post your comment.  We'll look into updating to include Mia Hamm's career since UNC!

Thanks and best wishes!