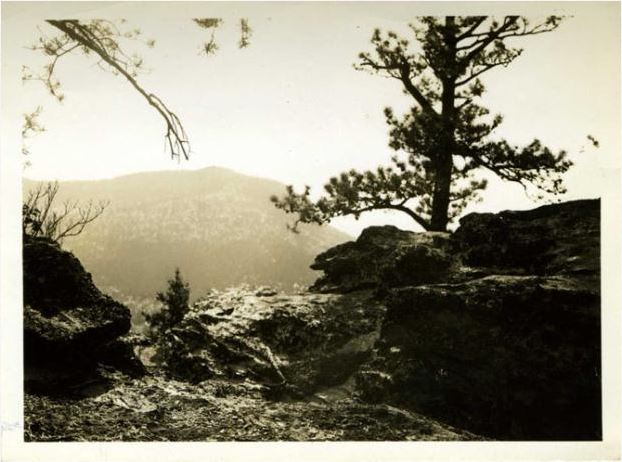 One of the most easterly mountain ranges in the state, the Sauratown Mountains are often called "the mountains away from the mountains" because they are separated from the nearby Blue Ridge Mountains. Prominent peaks in the Sauratown range rise from 1,700 feet to more than 2,500 feet in elevation and stand in bold contrast to the surrounding countryside, which averages only 800 feet in elevation.

Named for the Saura Indians who were early inhabitants of the region, the Sauratown Mountains are the remnants of a once-mighty range of peaks. Over many millions of years, wind, water and other forces wore down the lofty peaks. What remains of these ancient mountains is the erosion-resistant quartzite, which now supports scenic ridges and knobs, including Moore's Knob, Moore's Wall, Cook's Wall, Devil's Chimney, Wolf Rock and Hanging Rock.

In 1936, the Stokes County Committee for Hanging Rock and the Winston-Salem Foundation donated 3,096 acres of land to the state of North Carolina for the purpose of establishing a state park. 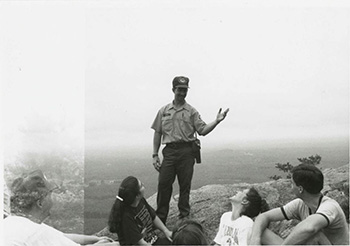 Many facilities in the park were constructed by the Civilian Conservation Corps (CCC) between 1935 and 1942. A concrete and earthen dam completed in 1938 impounded a 12-acre lake, and a stone bathhouse, diving tower and sandy beach also were built. Other facilities constructed by the CCC include a park road and parking area, a picnic area and shelter, and hiking trails. In 1991, the bathhouse was added to the National Register of Historic Places.

Funds from the $35 million state parks bond referendum approved by voters in 1993 paid for construction of Hanging Rock's new visitor's center. The fully accessible stone and wood structure includes an auditorium, exhibit room and a classroom for interpretation and education programs. It also houses the park office and serves as a contact station for the thousands of people who visit the park each year. 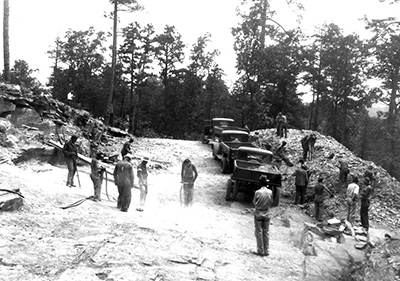 More than 704 species of mountain flora are found in the park. The most abundant plants are rhododendron, azalea, galax, mountain laurel and a wide variety of ferns. The majority of the park is forested by oak and pine, but in moist locations hemlock provides a canopy. Hanging Rock is one of the few places where Canadian and Carolina hemlock grow side by side.

In the highest elevations of the park, much bare rock is exposed. Mosses and lichens, the pioneers of mountain forests, have invaded portions of this bare rock, beginning the process of succession. As the underlying rock weathers and cracks, soil gradually fills the small crevices and flowering plants take hold. Such wildflowers include pink lady's slipper, turkey-beard, bird-foot violet and fire pink. Over thousands or even millions of years, with adequate amounts of water, these plant communities may become even more diverse and forests will creep uphill, ultimately covering the mountain.

The park's forests are home to many animals typical of the piedmont and mountain foothills. Mammal species include white-tailed deer, raccoon and gray fox. On summer evenings, bats can be seen flying overhead looking for insects or dipping down to a stream for a cool drink. 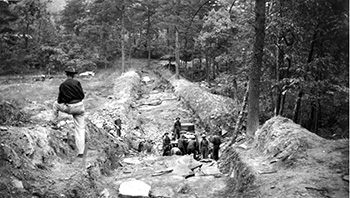 Birds are abundant in all seasons, especially in spring and fall when migrating species add to the resident population and the otherwise quiet mountain air is filled with the melodies of songbirds. Whippoorwills, eastern screech owls and barred owls add special effects while amphibians, including American toads, spring peepers and chorus frogs, lend harmony to warm evenings.

The moist forests and streams of Hanging Rock are home to a variety of salamanders. One species, Wehrle's salamander, is found only in this area of the state. Lizards and snakes are abundant and diverse. Most snakes are seldom seen and harmless, living in areas where insects and amphibians are plentiful.