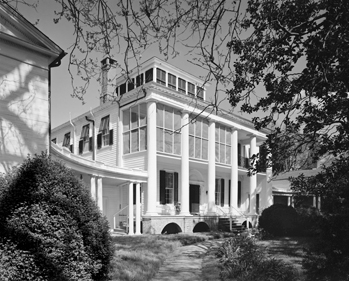 Hayes Plantation is a farm in Chowan County, across Queen Anne's Creek from Edenton. The plantation is known chiefly as the seat of the Johnston family. Samuel Johnston (1733-1816) purchased Hayes in 1765 from David Rieusett (Variants: Rieusset, Rieuset, Rieussetts) and made it his family's home until 1793, when he moved to the Hermitage, a plantation in Martin County. In 1814 Samuel Johnston gave Hayes to his son, James Cathcart Johnston (1782-1865). With the help of the English architect-builder William Nichols, James Cathcart Johnston built a new plantation house at Hayes, and he and his three sisters returned there to live in 1817. The plantation remained in the Johnston family until James Cathcart Johnston's death. In his will, Johnston left all his Chowan County property, including Hayes, to a business associate, Edward Wood. The Wood family continues to operate Hayes as a working farm.

The plantation that Samuel Johnston purchased contained 543 acres. It grew modestly during his lifetime to 665 acres, but dramatic growth occurred under the ownership of his son James Cathcart Johnston. The younger Johnston was an energetic manager of his estates, keenly interested in agricultural innovations. He acquired and cleared additional land, so that by 1860 the plantation encompassed 1,374 acres. Corn was the principal crop grown in the antebellum era, but Johnston planted other grains as well and raised livestock.

James Cathcart Johnston also inherited a substantial collection of books from his father. To house those books, he built a special wing for the library in the new plantation house at Hayes. The octagonal, Gothic library is one of many distinctive features of the stately structure. The house, still in use as a private residence, is considered one of the finest antebellum houses in North Carolina. A reproduction of the library, which includes many of the original books and furnishings from the Hayes house, is on display in Wilson Library at the University of North Carolina at Chapel Hill.

My question is Was the Hayes

My question is Was the Hayes plantation the only plantation in Edenton.? I am asking because I am look for my grandfather family Mr Thomas Evans he had total of 35 kids with different woman my grandmother married him when she was 23 and he was 65.Help if you can

Please tell me how the

Please tell me how the majority of slaves were transported to the Hayes Plantation. Did they arrive by boat at the waterfront near the house?

Thank you for your comment and for asking this excellent question! I am forwarding your comment over to our library's Reference Team so they can assist you further. A staff member from our library will be reaching out to you via e-mail soon.

The 1769 Sauthier Map of Edenton identifies the area then as “ Hayes “ and appears to show a few buildings on the property. To this day there has never been a definitive answer as to where the name Hayes originated. There is no record of anyone named Hayes ever owning the property. One seeking to research the history of this land can go to the Southern Historical Collection at the Wilson Library at The University of North Carolina in Chapel Hill. The Hayes Collection there is a fabulous resource and contains records from 1694-1928.

I am a descended from the

I am a descended from the Hayes line and I see here that the Hayes Plantation was operated by slave labor. Please let me know where I can get more information as it may be relevant to my family.

I am also a descendant from a

I am also a descendant from a Hayes, I've been researching my family history lately and I got stuck once I got to the family member with the last name Hayes. All I know about her is her full name (the first and middle name have various spellings, and Hayes is her maiden name) ' Annie Mae Hayes' and that she was from North Carolina, born in 1928. She had 5 children, one of which is my grandmother, who I also don't know much about. All I know about her is that she grew on a Lumbee Cherokee Reservation. But all of them were listed as 'black' or 'colored' on the little papers I did find, and this limited information is not helpful at all. So please contact me if anyone has any ideas or places for me to collect more information on this family line. Thank You!

Thank you for your comment! I am forwarding your request to our library's Reference Team so they can assist you further. A staff member from our library should be reaching out to you via e-mail soon.

Ms. Rucker, I have been

Ms. Rucker, I have been reading the story of your descendants. It is very compelling. I would love to speak to you. Please reach out to me via email if you would like to discuss further.

My daughters are all Hayes

My daughters are all Hayes and decended from slaves through their father whose last name is Hayes. I would love for them to know more about their ancestors and their journey that brought them to Canada.

I am also from the Hayes

I am also from the Hayes family. My great grandfathers name was York Hayes, all the Hayes in Bertie are my people.