See Also: Guilford Courthouse, Battle of (from the Encycopedia of North Carolina) 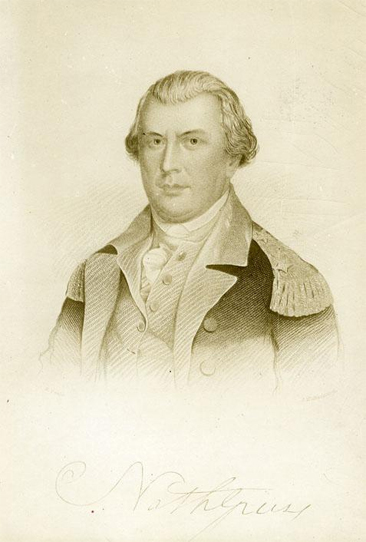 On March 15, 1781, American and British forces clashed for several hours near Guilford Courthouse. The battle was the culmination of several months of hard campaigning by the armies of Nathanael Greene and Lord Charles Cornwallis. British strategy centered on conquering the South by destroying Greene’s army. Aware of this plan, Greene and other American leaders refused to give Cornwallis a traditional fight, and instead engaged the British in several skirmishes and strategic retreats. Prior to Guilford Courthouse, the American strategy had resulted in the defeat of two detachments of Cornwallis’s main army: one led by Patrick Ferguson at King’s Mountain in October 1780 and the other led by Banastre Tarleton at Cowpens in January 1781.

After Cowpens, Greene withdrew to Virginia in what became known as the “Race to the Dan.” Cornwallis burned his baggage at Ramseur’s Mill in the interest of speed but unsuccessfully pursued Greene to the Dan. His men fought several skirmishes with Greene’s men at Torrence's Tavern and Cowan’s Ford, where Patriot leader William Lee Davidson was killed. The British crossed the Catawba at Beattie’s and Cowan’s Fords, and the Yadkin River at Shallow Ford. Greene’s forces crossed the Dan River shortly before Cornwallis’s men arrived, taking with them all of the boats along the south bank. Recent rains had flooded the river making the local fords unusable, saving Greene’s army from destruction. The “race” cost Cornwallis irreplaceable numbers of men to desertion and small skirmishes, and left his 2,000-man army completely destitute of supplies. One British officer late described his men, many of whom were barefoot, as living off of “green corn and carrion.”

Unable to wait for the rivers to recede without supplies Cornwallis fell back from the Virginia border while Greene’s army replenished itself with food and ammunition, and received reinforcements. On February 22, Greene’s 4,400 men recrossed the Dan River and began pursuing the British southward. The two armies fought several skirmishes within the area including engagements at Weitzell's Mill and Clapp's Mill. Headquartered at High Rock Ford Greene, with replenished supplies and holding a two-to-one advantage in men, decided to offer the open battle that Cornwallis had pursued for nearly three months. By March 14, the armies were within ten miles of each other near Guilford Courthouse, a heavily wooded area consisting of a few small houses, the county courthouse, and several small plowed fields.

On the morning of March 15, Greene deployed his army in three lines, each spaced approximately 400 yards apart. The first consisted of nearly 800 North Carolina militia arranged on the edge of a field with “their arms resting on a rail fence.” The North Carolina militiamen included William R. Davie, Benjamin Williams, Nathaniel Macon, James Turner, and David Caldwell. Nearly 850 Virginia militiamen stood as a second line within dense woods to the rear of the North Carolinians. The third line consisted of Greene’s regulars, the Continental soldiers from Maryland and Virginia. In addition, on the right and left flanks of the first line, Greene posted veteran Virginia and North Carolina riflemen, as well as Continental dragoons and infantry led by William Washington and Henry “Light Horse Harry” Lee. Among the riflemen stood Joseph Winston, Jesse Franklin, and Richard Allen. Marquis De Bretigny lead a small detachment of North Carolina militia dragoons attached to Washington’s force. Greene posted artillery at both the first and third lines, with those along the first having orders to fall back after the fighting began. Greene, following the example of Daniel Morgan at Cowpens earlier that year, ordered the North Carolina militia to fire two volleys and then fall back behind the Virginians. 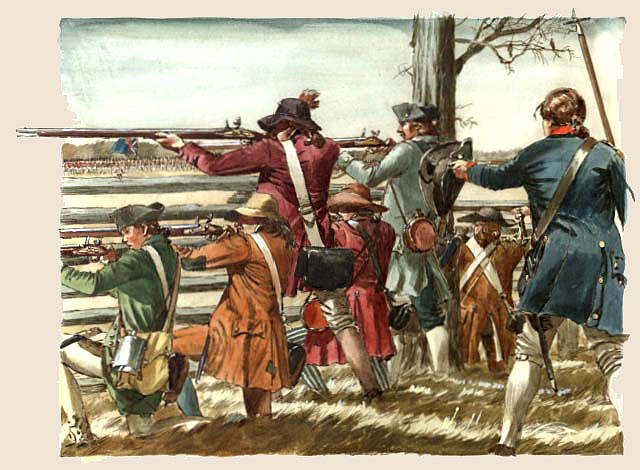 Taking Greene’s bait, Cornwallis's army marched out from its camp at Deep River Meeting House in the early morning hours. Several clashes erupted between British and American advance parties led by Banastre Tarleton and Light Horse Harry Lee at the New Garden Meeting House several miles south of Greene’s main army. At one point, Tarleton’s dragoons withdrew across the grounds of present-day Guilford College. British forces drove back the Americans, and by noon, Cornwallis was in striking distance of Greene’s army.

Cornwallis’s men advanced on Greene’s first line after a thirty-minute artillery barrage by both sides. The British broke through the first and second lines relatively quickly, but suffered severe casualties in the advance, particularly along the Virginia militia line. One American noted that, after his regiment fired a volley, the British “appeared like the stalks of wheat after the harvest man passed over them with his cradle.” Despite their losses, Cornwallis’s army pushed on to the American third line, where they engaged the Continental regulars in both small arms fire and hand-to-hand combat. After the war, a story developed which had it that Cornwallis ordered his own artillery to fire into the melee, despite being warned he would kill some of his own men. Recent research has proven this story completely apocryphal. The artillery did fire into the group, but only after American cavalry had entered the fray and threatened the British guns.

Unwilling to the risk the destruction of his army, and realizing that he had inflicted massive casualties on the British, Greene withdrew his army to Troublesome Ironworks nearly fifteen miles away. The battered British army did not pursue. Although Cornwallis’s army held the field, the Americans had punished them severely. Twenty-seven percent of Cornwallis’s army lay dead or wounded on the field. The Foot Guards battalions, considered the finest troops in the entire British army, suffered fifty-six percent casualties, including nearly all of their officers. By comparison, Greene lost only six percent of his force, the majority of whom were North Carolina and Virginia militiamen who had fled shortly after the battle began and been counted as missing in action. In a letter to Samuel Huntington, the president of Congress, Greene described the engagement as “long, obstinate and bloody.”

After the battle, Cornwallis withdrew his army first to Ramsey's Mill and then through southeastern North Carolina to the British base at Wilmington, where he resupplied his army. British Parliamentarian Charles James Fox told the House of Commons, “Another such victory would ruin the British army.” Fox’s assertion would be borne out in the following months. In late April 1781, Cornwallis marched north from Wilmington, focusing his strategy on Virginia instead of the entire South. Despite skirmishes at Swift Creek, Peacock Bridge, and Halifax, he and his men crossed into Virginia in mid-May. Five months later, Cornwallis surrendered his army to George Washington at the little seaside village of Yorktown, effectively ending major fighting in the southern colonies, and speeding along American victory in the war.

Baker, Thomas E. 1981. Another such victory: the story of the American defeat at Guilford Courthouse that helped win the War for Independence. [New York]: Eastern Acorn Press.

Buchanan, John. 1997. The road to Guilford Courthouse: the American revolution in the Carolinas. New York: Wiley.

Can anyone point me to where

Can anyone point me to where cornwallis camped on abbotts creek or a book showing where both sides where camped in western NC?

Interesting, well-written article, but like all the others only the battle's VIPs are mentioned. In a nation of the people, by the people and for the people, our historians are focused on the leaders, not the common people who did the fighting and dying. Why does this article not have a list of names of all the common soldiers who were in this battle? Were they not more important than the guys who said, "Charge?" After all, if only the generals showed up, there would have been no battle. I can google Cornwallis, Greene, Tarleton, Washington easily. I am more interested in the men they commanded simply because THEY won the war with their actions. Who were they? What were their lives like before and after the revolution? THEIR blood and sacrifice created America, not the generals who went back to their plantations and slaves.

Agree and that is why we

Agree and that is why we cannot solely depend on the internet for all of our information. We have a book about the soldiers for this particular battle in our library at http://ghl.nccardinal.org/eg/opac/record/11142100?locg=328 and also several books in general about the men who served in the state militia and the NC Continental Line in our library. Feel free to come check them out here at the library or perhaps a local library to you may have them as well.

what we some challenges for

Thank u for dis

Thank u for dis

I notice the BiCentennial

I notice the BiCentennial clock at Carthage Courthouse -Carthage, NC is green like the Statute of Liberty. Any history on how this time machine got to the location there; it's very interesting to me?

There is some information

There is some information about that clock in the Commemorative Landscapes project out of University of North Carolina at Chapel Hill. It is online at http://docsouth.unc.edu/commland/monument/264/. I hope this information helps!

Who were the important people

Who were the important people involved?

I recommend reading through

I recommend reading through the above article carefully. It does mention people by name who were important to the battle.