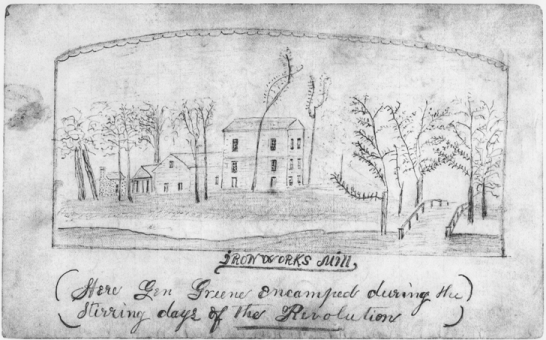 Troublesome Creek Ironworks was originally established as Speedwell Furnace in 1770 in what is now southern Rockingham County by Joseph Buffington, a Quaker ironmaster from Chester County, Pa. Using a lottery to raise capital, Buffington purchased the nearby "mine hill" of Henry Work and the site on the creek where he constructed a rock dam for waterpower, a bloomery to produce pig iron, and a forge for making finished iron items. Buffington sold the ironworks in 1772, probably discovering through practice what is now known through scientific analysis: that the titaniferous magnetite ore in the area contains too high a concentration of titanium dioxide to produce high-quality iron. This factor established a pattern of failure in all of the attempts to produce iron there.

By the time of the American Revolution, the furnace was in disrepair, but in the course of the maneuvering of the Southern Campaign of 1781, the site became a bivouac and rendezvous for both the British and the American armies. After the war, the ironworks property, which also included a sawmill, was acquired by veterans Col. Archibald Lytle of Hillsborough and Cols. Peter and Constantine Perkins of Pittsylvania County, Va. The earliest effort to establish a grist and flour mill on the property was in 1782, and by the end of the decade the mill was operating. The repaired iron furnace was sold to George Hairston and John Marr of Henry County, Va., who hired Benjamin Jones as the manager. Between 1790 and 1792 Jones ran the furnace with the labor of 35 enslaved people. During his southern tour in 1791, President George Washington, with whom Jones had served in the war, stopped at the ironworks for a visit.

After 1806 James Patrick, a miller, purchased the property from the John Marr estate. In 1810 Patrick had two of the three mills in the county and his flour, described as "first quality," was sold as far away as Petersburg, Va., and Fayetteville. The Patricks retained ownership of the property until after the Civil War. In 1869-71 the old iron mine, now owned by Levi Shaw, was leased by Thomas Graham of Philadelphia, who owned the North Carolina Center Iron Company, with furnaces in Guilford County near Friendship. Opened as the Dannemora Mine, the site produced ore as late as 1880. The old mill, burned and rebuilt in 1915, was operated by the Tilman W. Griffin family until after World War II. At an auction in 1968 the ironworks tract was sold to James G. W. McClamrock of Greensboro, who had long dreamed of preserving the property, and he eventually gave the mill site to the Rockingham County Historical Society.