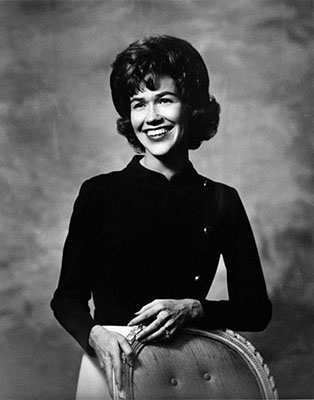 Patricia Ann Hollingsworth Holshouser was well prepared for the rigors of being first lady. She had campaigned on behalf of her husband, James Eubert Holshouser Jr., in his successful bid to become the first Republican governor in North Carolina in the twentieth cen­tury. In addition, she had become familiar with Raleigh and state government while he served four terms in the state legislature just prior to his election as governor. Since they would carry the Republican platform to the forefront for the first time since Governor and Mrs. Daniel L. Russell (1897-1901), the Holshousers were conscious of the scrutiny they would receive.

As a minister's child and one of a pair of identical twins, Patricia Holshouser was accustomed to being watched and thus was prepared to he in the public eye as first lady. These experiences gave her confidence and enabled her to assist the governor and carry out her duties. At thirty­ three years of age, she had developed poise and a sense of self that would sustain her through­ out their tenure.

Patricia and her twin, Nancy, were horn in Asheville on October 29, 1939, to the Reverend Leon Howard Hollingsworth and Bessie Jo Walker Hollingsworth. Because Mr. Hollings­ worth frequently moved from place to place as Baptist churches requested his services, the Hollingsworth family, which included the twins and their sister, Linda, lived in many towns, including Mebane, Boone, and Winston-Salem. The continual adjustment to new locations, schools, and friends contributed to the self-confidence of the future politician's wife and first lady.

While a nursing student at Wake Forest College, Patricia Hollingsworth began dating her future husband. She postponed her education to marry the young lawyer from Boone on June 17, 1961. Once settled into marriage, Patricia Holshouser resumed her schooling and enrolled at Appalachian State University, where she earned a B.S.H.E. On September 27, 1963, their daughter, Virginia "Ginny" Walker, was born. Patricia Holshouser taught sixth grade for one year in 1968 after her daughter entered school. By the time Mr. Holshouser was ready to launch his political campaign, Ginny was able to spend time with both sets of grandparents­ the Holshousers in Boone and the Hollingsworths, who then resided in High Point - thus allowing her parents additional time to travel about the state.

After Governor Holshouser took the oath of office, he, Patricia Holshouser, and Ginny settled into the Executive Mansion to begin their new adventure. Pat Holshouser knew that rearing their only child in the unique and unreal environment of the state's official residence was a mixed blessing. The Holshousers wanted their daughter to grow up in as normal an environ­ment as possible, and they did what they could to bring that result about. 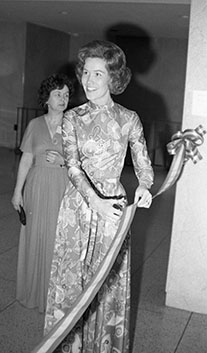 Patricia Holshouser continued to sew clothing for herself and her daughter, and she taught Ginny those skills as well. They also learned cooking and ceramic modeling. One of their great joys was using what they had learned to make Christmas presents.

The General Assembly passed a bill in 1973 to renovate the Executive Mansion. With the per­sistence of the first lady, another bill for addi­tional funding passed in 1975. That renovation and partial restoration was the largest and most extensive since the mansion was built. The cost was $854,806.70, largely spent on the mechanical systems - replacing the heating system, adding central air conditioning, recessing and changing the plumbing and electrical systems-and adding a fire escape for the second and third floors. With only about $35,000 designated for decorative elements, she persuaded North and South Carolina textile companies to donate the materials needed to make draperies, for upholstering, and for carpeting. She used her sewing skills and with a group of volunteers and mansion prison staff created part of the window treatments. To make way for most of the work to be done, the Holshousers resided in a rented house from June 1975 to February 1976. When they returned to the mansion, she hosted a party and viewing of the first and second floors for the workmen and the employees of the architectural and engineering firms. A color booklet was produced to publicize the newly renovated Executive Mansion.

The bicentennial year brought many demands on Pat Holshouser. In preparation for that historic year, she hosted at the Western Residence a conference of first ladies from through­ out the Southeast, led by Georgia's first lady, Rosalynn Carter. There the women formulated and organized upcoming celebrations. As a member of the board of directors of the Pines of Carolina Girl Scout Council, she was also involved in their planning of bicen­tennial events. Girl Scouts from each of North Carolina's one hundred counties designed and created squares for a quilt and presented it to Mrs. Holshouser at the Executive Mansion. A spring trip to Ireland for the governors and first ladies from the thirteen original colonies was another highlight of 1976. For the holiday season, a tree featured in the Ballroom was deco­rated with handmade ornaments from North Carolina's schools for the deaf.

President Gerald R. Ford appointed Patricia Holshouser to the National Council on Economic Opportunity, which worked directly with the Office for Equal Opportunity. Governor Holshouser supported his wife's advocacy of volunteerism in the state by creating the Com­mission on Citizen Participation and appointing her to head that body.

The Holshousers established a new home in Southern Pines after leaving the Executive Mansion. In an interview, the former first lady said that she "was ready to return to her role as wife and mother. I suppose I was also ready to renew my own identity as an individual with goals of my own." Pat Holshouser once again pursued her goal of becoming a registered nurse, one that she had set aside when she married. She received a master's degree in nursing from the University of North Carolina at Chapel Hill and worked at Moore Memorial Hospital in Southern Pines for several years. When former governor Holshouser's kidney problems became acute, his wife gave him dialysis treatments at home for six years before his kidney transplant.

In 1989 Governor and Patricia Holshouser participated in the mar­riage of their daughter Ginny to John Edward Mills Jr. and enjoyed being grandparents to their granddaughters born in 1992 and 1994. Mrs. Holshouser's mother moved to Pinehurst, and the family spent a great deal of time together.

In reminiscing about her tenure as first lady, Pat Holshouser said that it "was really wonderful and it pro­vided me with many opportunities to continue meeting the people of the state and to promote causes....I will always remember those years as a special blessing."