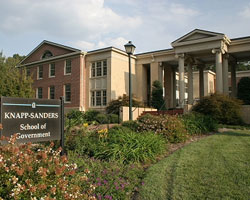 The concept of the Institute of Government was devised by state official and academician Albert Coates in 1931, when he recognized that many local governments in North Carolina did not have the time, resources, or personnel to stay abreast of legal and political changes taking place at five overlapping governmental levels. He proposed to meet these deficiencies through a series of guidebooks, a clearinghouse of information, and a central meeting place near the University of North Carolina at Chapel Hill. Coates established a steering committee in 1931, held an organizational meeting the next year, distributed 100,000 copies of his plan to the general public, and by September 1932 held the first training program for public officials. His staff produced the publication Popular Government for local officials, as well as a legislative service. In 1939 a $100,000 building was dedicated for the use of the Institute of Government, mainly through the generosity of several large contributors. In 1942 the institute became a part of the University of North Carolina.

Now under the umbrella of UNC-Chapel Hill's School of Government, established in 2001, the Institute of Government continues to provide educational, advisory, and research support for local and state governments. It is the largest university-based local government training, consulting, and research organization in the country, sponsoring more than 200 classes, seminars, schools, and specialized conferences for more than 14,000 public officials annually. The success of the institute is due to a unique relationship with North Carolina's nearly 700 county and municipal governments. Elected officials, city and county managers, finance directors, purchasing agents, information services directors, attorneys, budget directors, school officials, and numerous other public managers and employees have regular contact with faculty and staff. Every year the institute publishes more than 100 books, bulletins, chapters, articles, and other reference works related to state and local government. When the General Assembly is in session, the institute's Legislative Reporting Service puts out the Daily Bulletin in print and electronic format for legislators and others.

Albert Coates, The Story of the Institute of Government (1981).