Jacksonville is the county seat of Onslow County. It was authorized in 1842, but lack of action by the county commissioners prompted the General Assembly to abrogate the act and re-authorize the town in 1849 (1849, ch. CCXXV). It is named in honor of President Andrew Jackson.

The county seat for Onslow County has been in the same location since 1755. The original courthouse was built near Wantland's Ferry, on the New River, and in 1785 the General Assembly authorized the small town there to be known as Onslow Courthouse. Jacksonville was authorized on the same site, but the name Onslow Courthouse persisted until the 1870's. 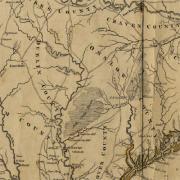 Union incursions into the coastal regions of the state in the Civil War meant that the county was under continual threat from the beginning of the conflict. In 1862, Jacksonville was raided by Union troops under the command of William Cushing, who succeeded in raising the Union flag over the courthouse and taking several prizes.

The town grew slowly, with the residents making their living from the manufacture of naval stores (tar, pitch, turpentine), lumber, small farming, and fishing. In the census of 1940, the town population still remained under 900. However, the building of Camp Lejeune and the Marine Corps Air Station at New River, which began just prior to the United States' entry into World War II, brought huge changes. By 1950, the town had grown to nearly 4000, while the county population almost tripled. At the same time, the acquisition of the huge tracts of land necessary for the base required the dispossession of approximately 2500 people from their homes and farms. Kellumtown, a small African-American community southeast of Jacksonville, was one result of this land acquisition.

Jacksonville's economy and culture are now intimately tied to the military presence in the area. According to a 2004 survey, more than 90,000 jobs and $5 billion were produced by the presence of Camp Lejeune. The oldest continuously run USO office (opened in 1942) still exists in the city, and the city also memorializes the first African-American marines with the Montford Point Marine Museum at Camp Johnson.

"Montford Point Marines: Loyalty and Service in the Face of Prejudice and Discrimination." University of North Carolina at Wilmington. https://library.uncw.edu/web/montford/