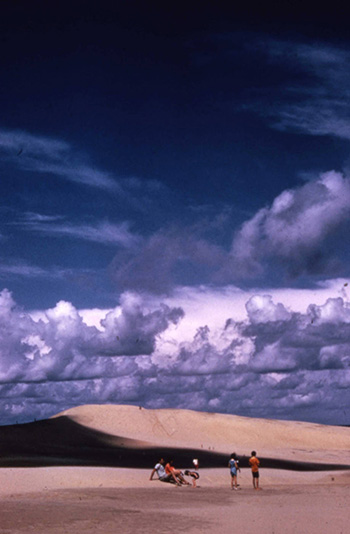 Jockey's Ridge is the tallest living natural sand dune system in the Eastern United States. Its height varies from 80 to 100 feet, depending on weather conditions.

Shifting maritime winds blow billions of grains of sand in different directions, constantly changing both the shape and size of the dune. Why doesn't the sand blow away? In the winter, the winds usually blow out of the northeast and in the summer out of the southwest; therefore, the sand is constantly blown back and forth. Also, the dunes' tiny sand particles hold moisture throughout the year. The sun dries the top layer of sand. But, just below this layer, the sand stays wet. The high winds from northeasters blow the top, dry layer off, but the wet layer below stays put.

Jockey's Ridge is an example of a medano—a huge hill of shifting sand that lacks vegetation. There are several prominent sand dunes in the area. Of them all, Jockey's Ridge is the most spectacular.  Geologists believe that Jockey's Ridge was formed when strong water currents from hurricanes and storms washed sand from large offshore shoals onto the beach. Throughout many years, the wind picked up this sand and blew it inland. These tiny grains of sand evolved into a system of dunes that now stretches for many miles along the coastline.

Long before the first European settlers, the Algonquian Indians inhabited the Outer Banks. Following its sighting by Spanish and French explorers, the ridge became an important landmark for mariners. In the early 1800s, this remote coastal area began to develop as a summer resort. Development was slowed during the Civil War, but with the construction of a series of bridges in the 20th Century, the problem of access to the barrier islands was solved. Development picked up at a rapid pace. Today, the Outer Banks is one of the most popular recreation areas on the eastern seaboard.

Many legends surround the origin of the name Jockey's Ridge. The most popular is that the name of the dune is based upon the early inhabitants' practice of capturing wild ponies and racing them on the flat surface at the base of the dune. The steep sides of the ridge served as a grandstand for spectators. An old map, which is displayed in the park's museum, has the ridge spelled "Jackey." 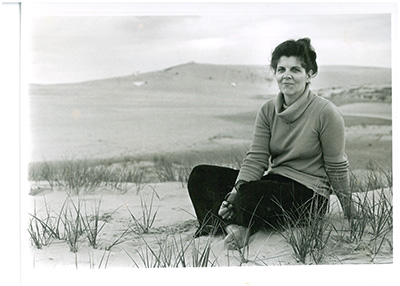 On a summer morning in 1973, a couple of children were playing on the dunes. When they saw a bulldozer flattening out part of Jockey's Ridge, they went running home to tell their mother. Carolista Baum went to investigate and found that an earth-moving machine was preparing a residential development site at the base of Jockey's Ridge. For years, local groups had talked of protecting the large dune from encroaching development, but no substantial steps had been taken. This destruction, however, forced Carolista into action. She planted herself in the path of the bulldozer, forcing the operator to shut the equipment down. From that point on, the effort to "save our sand dune" took on new determination. The People to Preserve Jockey's Ridge was organized. Appeals, backed by a petition, were made to local and state governments. The state's Division of Parks and Recreation was asked to study the feasibility of making Jockey's Ridge a state park.

In 1973, the Division of Parks and Recreation issued a report in favor of the park, and a year later the dune was declared a National Natural Landmark. In 1975, the General Assembly appropriated funds to create Jockey's Ridge State Park. With this money and matching federal funds, the state bought 152 acres. An additional purchase from the Nature Conservancy brought the size of the park to 266.8 acres. Today, the park encompasses 420 acres.

The nonprofit group Friends of Jockey's Ridge provides additional support for this popular state park. Members promote public awareness of the sand dune. They also raise funds to assist in the development of facilities and educational programs. For more information about Friends of Jockey's Ridge, contact the park office, or click here to visit the association's website.

The hot, dry climate of Jockey's Ridge State Park attracts a unique plant and animal community to this harsh, yet fragile, environment. Many people think that Jockey's Ridge is an area essentially without plant life; but that's not the case. Even though shifting sands provide a challenge to plant growth, several plant communities are present in the park.

Small pockets of American beachgrass grow along the base of the dune. Thickets of wax myrtle, bayberry, red cedar, live oak and red bay are found in protected areas near the parking lot. Southern red oaks, hickories, sweet gum and loblolly pine may be found to the west of the dune.

Though visitors will not encounter many animals on the ridge, early morning hikers will often see tracks that rabbits, foxes, lizards and other animals have left in the sand during the night. Heavy rains form temporary pools in the lower level of the dunes. These pools serve as a source of water for raccoons, opossums, mice and muskrats. Bird life is abundant in late summer and fall when large numbers of migrating birds travel southward. Warblers, sparrows, flycatchers and other species may be seen in the shrub thickets. The sound-side of Jockey's Ridge is home to a variety of waterfowl in the winter.