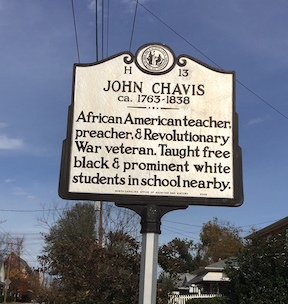 When was the Antebellum period in U.S. History? And what do you know about the lives of people of color back then?

Life for African Americans during the Antebellum period

Did you guess that it was the time before the Civil War? If so, you are right! In American history, the Antebellum Era refers to the years between 1815 and 1860. During this period, most African Americans lacked basic human rights and freedoms. Yet, some were able to overcome oppression and fight against racism. John Chavis was one of these people. He became one of the most educated African American men in the country.

Historians do not know a lot about John Chavis’s early life. He was born around 1762. What we do know is that he worked and traveled as a free black man. In 1778 during the American Revolution, he enlisted in the 5th Regiment of Virginia. And he fought for the Patriot cause.

He served for three years and was then discharged. That means he left with a good record. He studied at Washington Academy, now called Washington & Lee University. He may have even studied at Princeton University. After his studies he went back to Virginia. There he became a licensed Presbyterian minister. He worked in the south for many years ministering to enslaved people.

In 1808 he moved to North Carolina and began work as an educator and preacher. He traveled around North Carolina, Virginia, and Maryland to preach to different congregations. Most historians believe his most significant contributions were the schools he operated. Chavis was a respected educator of both black and white children.

He opened a school in Raleigh where he taught both white and free black students. He had to teach white students during the day and black students at night. His schools were some of the best in the state and he provided important education to blacks. He also taught students from notable families. His students included future Governor Charles Manly and the sons of Leonard Henderson. Henderson was Chief Justice of the North Carolina Supreme Court. 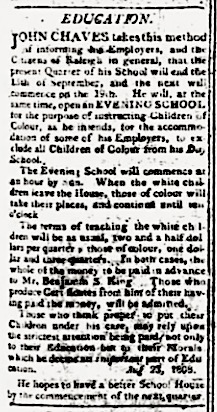 John Chavis made the most of his educational opportunities. And he dedicated his life to making sure that others would have the opportunity to learn as well. Unfortunately, Chavis had to close his school in 1832. At that time North Carolina passed laws that prohibited blacks from teaching and preaching. The General Assembly also passed laws forbidding enslaved people to learn to read and write. John Chavis died a few years later in 1838.

How can you and your classmates follow in John Chavis’s footsteps?