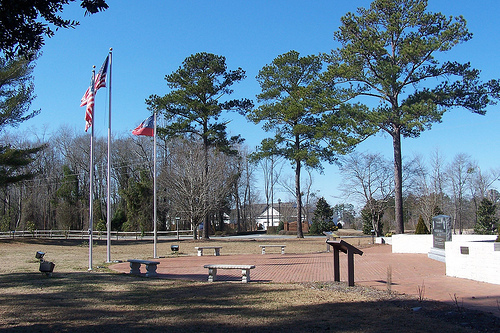 The Civil War battle at Kinston on 13-14 Dec. 1862 was the first major Confederate opposition to the advance of Brig. Gen. John G. Foster to Goldsboro. Foster led a force of about 10,000 infantry, 640 cavalry, and 40 pieces of artillery. The defending Confederates numbered about 2,014 and were commanded by Brig. Gen. Nathan G. "Shank" Evans, who won fame at the First Battle of Manassas (Bull Run).

On 12 Dec. 1862, as his column approached Kinston from New Bern, Foster sent a small party of cavalry on a feint down the main road into Kinston. Meanwhile, the main body detoured to the south and west, intending to attack the town from the southwest, an unanticipated direction. At midmorning on 13 December, the Union army reached Southwest Creek, a small tributary of the Neuse River. Two regiments forced a crossing of the creek, driving back the North Carolina regiment holding the position. When Evans arrived, he withdrew all of his forces to a defensive line two miles from the bridge crossing the Neuse at Kinston and held this strong natural position overnight.

The Union attack resumed at 9:00 a.m. the next day. The inexperienced Federals faced both stiff Confederate resistance and casualties inflicted by their own artillery. Nevertheless, they crossed the swamp in front of the Confederate position and turned its left flank, sending that portion of the troops retreating north across the bridge. Evans, who thought that all of his men were safely across, ordered the bridge burned and turned his artillery on the troops remaining on the right and center of what had been the Confederate line. Shelled by the enemy and their own commander, the remaining Confederate troops made for the bridge. Closely pursued by the Federal advance, the organized retreat fell apart when the men approached the burning span. Nearly 400 of Evans's command were captured in the race for the burning bridge. Confederates north of the river retreated to establish a position two miles beyond Kinston. Foster's men extinguished the flames on the bridge and crossed on the partially destroyed span. Once across the river, Foster entered Kinston and sent a request for Evans's surrender, which was curtly refused. Before Foster could reform his units for another attack, the Confederate commander withdrew once more. The Union forces camped near Kinston that night and recrossed the river the following morning to resume their advance. Foster had lost about 160 killed and wounded in the fight. Confederate casualties were 125 killed and wounded and 400 captured, and Kinston was thoroughly looted by the Federal troops.

I am wondering if a Danby was

I am wondering if a Danby was killed or wounded here. Thank you.

Just learned my 3rd great grandfather fought in this war. On dec 12 he suffered from his wounds and later died in kinston on the 17th. Just knowing this is incredible. Wish I can find out more of him but his birth parents are a mystery for now.

Hello there. I visited the

Hello there. I visited the Kinston Battlefield memorial today. I'd like to know about the Confederate States flag which is there. I have not seen it anywhere else (Sumter to Gettysburg). It is unique in that it has a star in the middle of the circle of stars in the top left. Can any one shed any light please?

The flag you are referring to

I have an ancestor who was wounded during this battle, and died on Jan 1, 1863. He is buried in the New Bern national cemetery. Charles Pullin Co. H 85 Penna.

Is there a record of

Is there a record of Confederate casualties from this battle?

Where is this located in

Where is this located in Kinston.

It sounds like you have a question.  Please let me know if we can help you find any information.

Feel free to post a new comment or reply here with information about what you are looking for.