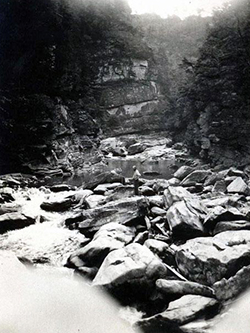 Linville Gorge is among the most spectacular and ecologically important natural areas in North Carolina. Located in Burke and McDowell Counties, the gorge was carved by the Linville River, which arises on the slopes of nearby Grandfather Mountain and runs for 12 miles in a 2,000-foot descent through the Blue Ridge before joining the Catawba River on the piedmont below. The gorge is formed by two parallel ridges, Jonas Ridge on the east and Linville Mountain on the west, which average about 3,400 feet in elevation along their rims. The riverbed is about 1,500 to 2,000 feet below the surrounding ridges, but in a few spots the gorge is almost 2,800 feet deep.

Bold outcroppings, jagged spires, chimney-like formations, and steep cliffs protrude from the dark green mantle of forests that cloak much of the region. Perched high on the gorge rim, Wiseman's View and Table Rock Mountain provide dramatic vistas of the gorge and nearby mountains and piedmont. The dramatically rugged scenery is due to the resistant Precambrian granitic quartzites that were solidified more than a billion years ago from molten rock. Considered to be the deepest chasm in the eastern United States, Linville Gorge's terrain was largely unsuitable for logging, so that extensive tracts of virgin timber have survived.

The gorge was named for William Linville, who, along with his son John, was killed by Indians just above the main waterfall in 1766 during a hunting and exploring expedition. Subsequently, the waterfall and gorge were named in memory of Linville. The region was a popular collecting site for many pioneer botanists such as André Michaux, John Fraser, and Thomas Nuttall. In more recent years, the upper section of the gorge was preserved through the generosity of John D. Rockefeller as the Linville Falls Recreation Area, and 10,975 acres of the gorge were incorporated into the Linville Gorge Wilderness, part of the original national wilderness system established in the 1960s. 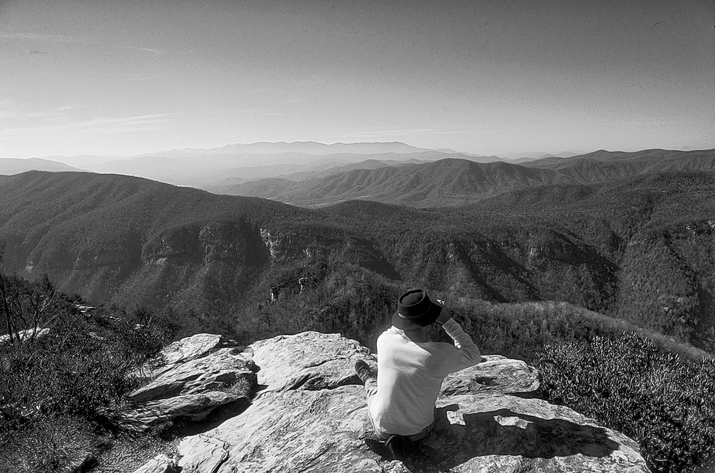 A hiker surveys the horizon from the edge of Linville Gorge. Photograph courtesy of North Carolina Division of Tourism, Film, and Sports Development.