At her home on Harkers Island, Madge Guthrie told me about Christmas when she was a child during the Great Depression. Renowned for its fishing and boatbuilding traditions, Harkers Island is east of Beaufort, in the marshy stretch of coastal villages that people in Carteret County call "Downeast." The island was a world unto itself in Guthrie's youth, before the bridge to the mainland was built, and times were hard. Christmas -- and maybe most of a Harkers Island childhood-- was a time of simple joys.

A "dingbatter" is, well, let's say a term of endearment for those not lucky enough to have grown up Down East. 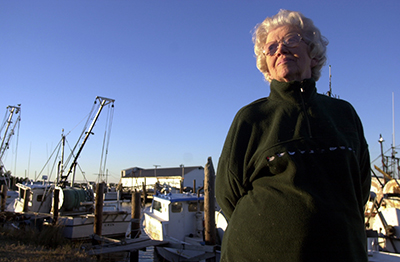 I wondered if the Great Depression dampened children's Christmas spirits.

She looked through her window at the stars out in the dark.

Seward, Chris. "Madge Guthrie."  Photograph. 2000. To request permission for further use or to purchase a print, please contact the News & Observer.

I am sure this is the star

I am sure this is the star guided Madge Guthrie's life.