Sheila Kingsberry-Burt made me laugh, broke my heart and lifted my spirits. She told me about wrenching hardships of growing up in a sharecropping family in Warren County, and then said that she'd rather live there than any place else on earth. "Here I can feel the spirit of my grandmother, " she told me, "and I love the countryside, the sky and the color of the dirt and the hills."

Kingsberry-Burt is a survivor of poverty, child abuse and teen pregnancy. She is a community activist, a minister, a poet, and she fixed me the best fried chicken I've ever eaten. She is also a single parent who beams like the noonday sun when she talks about her two sons, one an Air Force officer, the other a Morehead Scholar at the University of North Carolina at Chapel Hill.

I interviewed her at her home in Hecks Grove, the little country place where she grew up. Sharecropping and tenant farming were still a way of life for nearly half of all North Carolina farmers when she was a girl in the 1950s. This is how she remembers that life. 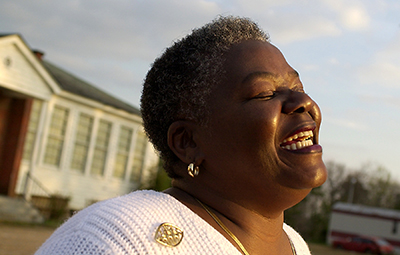 Seward, Chris. "Sheila Kingsberry-Burt."  Photograph. 2001. To request permission for further use or to purchase a print, please contact the News & Observer.