On the night of Jan. 18, 1958, Welton Lowry and hundreds of other Lumbee Indians surrounded a Ku Klux Klan rally near Maxton, 90 miles south of Raleigh in Robeson County. The Lumbee launched barrages of gunfire over the Klansmen's heads and drove the hooded crowd away. Their victory was featured in Life magazine and helped inspire an Indian pride movement throughout the United States.

The Klan's leader was James "Catfish" Cole, a former carnival barker and tent evangelist. Since 1956, Cole had been barnstorming the Carolinas, preaching against "race mixing and Communism"--which he made sound like the same thing -- to crowds as large as 15,000.

Routed in a gunfight with an NAACP chapter the previous fall, Cole and the Klan had hoped to redeem themselves in Robeson County. Cole had accused the Lumbee, a third of the county's residents, of not respecting the South's code against interracial relationships. "There's about 30,000 half-breeds in Robeson County, and we are going to have a cross burning and scare them up, " Cole boasted.

When Welton Lowry stood up against the Klan, he was following in a family tradition. His great-uncle, Henry Berry Lowry, was the legendary Lumbee "Robin Hood" who protected poor people of all colors against Confederate guerrillas and the Home Guard during the Civil War and Reconstruction. The story of his "Uncle Henry" is told in a popular outdoor drama in Pembroke, 10 miles from Maxton, and was recently the subject of a fine novel, "Nowhere Else on Earth, " by Josephine Humphreys.

Now 88, Weldon Lowry is a retired educator, farmer and minister. I interviewed him at his home in Pembroke, where a portrait of Henry Berry Lowry hangs over the mantelpiece. 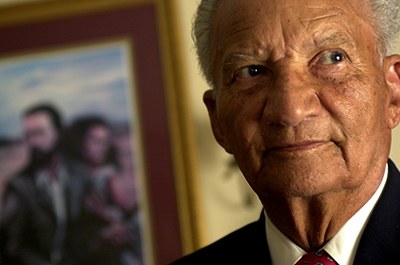 Seward, Chris. "Welton Lowry."  Photograph. 2001. To request permission for further use or to purchase a print, please contact the News & Observer.