Odell Spain: My Way Of Life

Odell Spain and I talked as we drove around Goose Creek Island, a broad, marshy peninsula surrounded by Pamlico Sound. Born in 1931, he grew up there in Hobucken, once a bustling fishing community, now almost a ghost town. A former oysterman, Spain is the last male descendent of the Spain family that has lived on Goose Creek Island for two centuries.

He has a daughter in Arapahoe, off the island in another part of Pamlico County, but he lost two sons in tragic accidents: one was killed by a convenience store robber in South Carolina, and the other died a couple of years ago when a trawler accidentally capsized his fishing boat.

A renowned musician and storyteller, Spain has somehow kept a warm sweetness about him despite the anguish he feels over the loss of his sons and the disappearance of the community he knew as a youth. Spain told me a story about Brant Island, a small island in Pamlico Sound where fishermen used to camp during the summer to tend pound nets. During World War II, the military turned Brant Island into a bombing range, but the pound netters did not give up their fishing camps so easily. 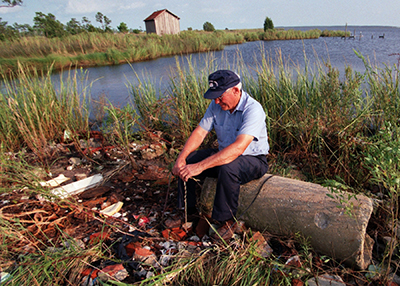 Seward, Chris. "Odell Spain."  Photograph. 1998. To request permission for further use or to purchase a print, please contact the News & Observer.