Ray Wells: There's A Man For You

Nobody can skin a snake, make friends with a bear or navigate a swamp at night better than Ray Wells. Though he has made his living as a timber cruiser, fish spotter, heavy-equipment operator, railroad worker and garage owner, his real passion is for the woods. He is at home in the wildest places of the Lower Cape Fear: Angola Bay, the Black River swamps, Holly Shelter Pocosin. He has also been introducing Boy Scouts to that wilderness for 43 years.

I first met Ray during a paddling trip at Shelter Creek, in Pender County. That night we talked and ate fried catfish till all hours. Later, Ray and I spent a day poking around his favorite haunts along the Black River, by small towns like Ivanhoe, Atkinson and Point Caswell. He has seen the woods and swamps change a great deal over his lifetime. Just recently, one of his favorite boyhood places, Watkins' Seine Hole, a fishing beach on the Northeast Cape Fear River, was bought and developed by a corporate hog company. "You wouldn't know the place now, " he told me. "It was beautiful country."

Rheumatoid arthritis keeps him out of the woods these days, but Ray's stories are a powerful reminder that we still have many wild places worth fighting to preserve. And some of those places, it turns out, are in the human heart. 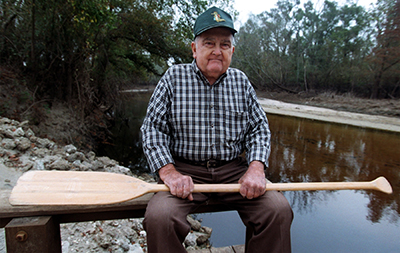 Seward, Chris. "Ray Wells."  Photograph. 1998. To request permission for further use or to purchase a print, please contact the News & Observer.