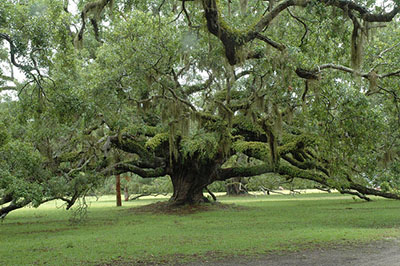 The Live Oak, or Guercus Virginiana, is a hardy tree growing in coastal plains from Southwest Virginia to Texas. Unlike most trees which grow primarily vertically, the Live Oak only reaches highs of 50 to 60 feet, and utilizes its nutrients to grow branches outwards, up to 120 feet in width. It only sheds its leaves after new ones have formed, leading to its common name of ‘Live’ Oak. The leaves themselves are extremely tough and salt spray resistant, while the roots of the oak can withstand temporary saturation in salt water from storm surges or abnormally high tides. The wood of the Live Oak is unusually heavy, having a higher density than nearly all hardwood trees in North America. When air dried, it weighs about 55 pounds per cubic foot; the heaviest of all oaks.

The Live Oak’s large protective canopy provides a habitat for numerous varieties of birds, insects, and mammals, many of whom forage for its acorns. In addition, the species is also frequently the host for Spanish Moss and Resurrection Ferns. These plants use the tree for physical support but not for nourishment, instead deriving their food supply from rain and their surrounding atmosphere.

The Live Oak was prized in early America for its usefulness in shipbuilding. In addition to its strength, resiliency, and durability, the Live Oak also grows in different shapes, suiting the curves or angles needed for ship parts like frames and braces. It was also, however, one of the most difficult woods to work with. Its density made it hard to cut, and its weight and remote, inhospitable growing habitats made it challenging to transport to Northern shipyards. In the late 18th and early 19th centuries the US Government would hire crews to go ‘Live Oaking.’ These crews would spend months or even years in Southern maritime forests cutting, processing, and transporting the wood. Most of these crews avoided Live Oaking in North Carolina because the shallow intracoastal waterways prohibited large ships from transporting the lumber, though the Live Oak groves of Bald Head Island were occasionally utilized. As a result of this extreme deforestation, nearly all old-growth Live Oaks were gone by the late 1800’s.

For more information on Quercus virginiana, the Live Oak, visit these resouces: