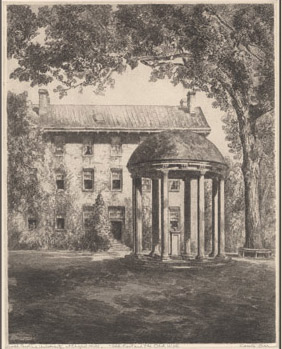 The Louis Orr etchings were 51 etchings by world-class artist Louis Orr, portraying public school buildings, churches, private residences, and scenic views around North Carolina selected for their historic, architectural, or geological significance. A native of Hartford, Conn., Orr lived and worked for most of his life in Paris, where he gained a reputation as one of the foremost etchers of his time. Attorney and businessman Robert Lee Humber, who hailed from Greenville, lived in Paris during the 1920s and 1930s. In 1927 Humber and Orr met and developed a close friendship.

During the 1930s, Humber proposed that Orr execute a series of etchings reflecting some of the finest examples of North Carolina's architecture and historical sites. Humber hoped to preserve North Carolina's heritage through the work of a recognized master of the art and to provide affordable, original artwork to schools, colleges, public libraries, and institutions as well as individuals throughout the state.

Meeting in New York City in 1939, Orr and Humber agreed that Orr would produce 50 etchings of a uniform size, plus a larger one of the State Capitol. Humber would underwrite the cost of the project. They refined the final list of subjects in consultation with North Carolina historians and other authorities on the state's history, including C. Christopher Crittenden, R. D. W. Connor, and Archibald Henderson.

Orr began the series in 1939 and completed it in 1952. He made several tours of the state to sketch his subjects, returning to his Hartford studio to execute the copper plates. In 1953 Orr returned to Paris, where he continued to work until his death in 1966.

Do you know where I can

Do you know where I can purchase a print or photo of Louis Orr's etching of the Old Mint in Charlotte NC? Also, is it possible to purchase the book referenced in your website (Robert Lee Humber, "History of the Etchings on North Carolina by Louis Orr," North Carolina Libraries 23 (Summer-Fall 1975)? I am trying to purchase a gift for a special person who collects old prints and photos and maps of Charlotte, particularly the Old Mint or the area of the current federal courthouse on Trade Street. Thank you for any information

So – to answer your questions as best I can:

For a copy of Orr’s etching, you may want to contact the Mint Museum in Charlotte.  Here is a link to their website: http://www.mintmuseum.org/visit/mint-museum-randolph/.  They may very well sell a print, and, if not, their curators and museum shop staff might be able to suggest a store that might or that they may purchase gift shop prints from.  You may also want to look around online for sites that sell architectural prints.  Finally, I cannot vouch for any stores or vendors, but you may also want to check online at a site like Etsy or Art.com.

I hope this helps!  Please let me know if I can help with anything else.