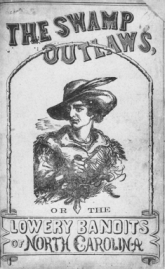 During the Civil War many Lumbee Indians of Robeson County banded together under the leadership of Allen Lowry and hid in swamps along the Lumber River to avoid forced labor in the building of Confederate fortifications along the Cape Fear River. After the war, former Confederates under the name of Conservatives dominated the county government and began to retaliate against the Native Americans. With Lowry as leader, the new band of refugees started raiding the plantations of the Conservatives. In 1865 Allen Lowry and his oldest son, William, were executed as bandits, and leadership of the band passed to Henry Berry Lowry, Allen's youngest son.

Governor William W. Holden proclaimed Henry Berry Lowry an outlaw on 10 Nov. 1868. Lowry surrendered and was jailed in Lumberton but escaped. Eight members of the band were captured in the winter of 1869-70; two were tried and found guilty but escaped from the Wilmington jail where they were imprisoned, and the band continued its raids and killings. On 12 Nov. 1870 a federal artillery battery was sent to Robeson County to subdue the Lowry Band but failed to contain the raids. In 1871 the General Assembly offered a bounty on Henry Berry Lowry. Col. Francis Marion Wishart organized a militia unit in an effort to capture Lowry but only managed to seize several members of the band.

On 15 Oct. 1871 federal troops withdrew from the county, and early in 1872 the Lowry Band conducted a lucrative raid on Lumberton, after which Lowry apparently disappeared. It is not known whether he was killed, either accidentally or intentionally, or vanished with the money obtained in the Lumberton raid, but his disappearance marked the end of the Lowry Band. By the close of 1872 its remaining members had been killed. Whatever his fate, in the years since 1872 Henry Berry Lowry has become a folk hero to the Lumbee Indians.

W. McKee Evans, To Die Game: The Story of the Lowry Band, Indian Guerrillas of Reconstruction (1971).