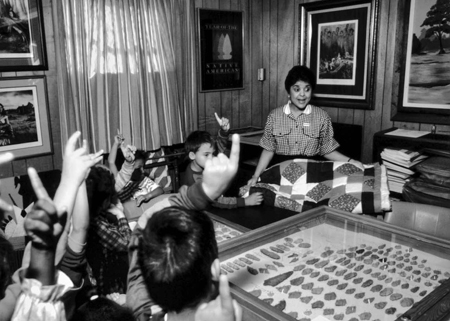 The Lumbee tribe, with 53,800 enrolled members, was in the early 2000s the largest of North Carolina's American Indian groups and the ninth-largest tribe in the United States. The Lumbee have been identified by a number of names during the history of their official relationship with the state of North Carolina. Native historians believe that the modern tribal name originates from the Lumber River, which traverses Robeson County and is an important historical, cultural, and spiritual symbol for many tribal members. Most Lumbees live in Robeson County and the adjacent counties of Cumberland, Hoke, and Scotland, and these counties are considered by the Lumbee Tribal Council to be the tribe's home territory, although there are also sizable communities of Lumbee people in Greensboro and elsewhere. Some Lumbees resided in the Bulloch County, Ga., area from 1890 through 1920. The Robeson County communities of Pembroke, Prospect, Union Chapel, Fairgrove, and Magnolia have long been predominantly Lumbee.

I'm trying to get further

I'm trying to get further into my family history in the lumbee tribe. If anyone could help it would be greatly appreciated. My grandparents are Gurney Brayboy and Eula Mae Oxendine.

This is a good question for reference librarians to respond to. You should hear back from them soon.

How do I go about finding

How do I go about finding history of the lumbee tribe. My father doesnt remember the tribe my grandfather told him we fall under.

For information on the Lumbee Tribe, I suggest you look at their website. There is a history and culture section. https://www.lumbeetribe.com/

Would like to know if I'm at least 25%, my grandma's name is Patty (Bell) Hernandez

Yes. Aunt Patty was a

Yes. Aunt Patty was a wonderful woman. She had a great story too. She was a "Lumbee Rosie the Rivoter. " She met Frank at movie theater before World War II. Frank had a remarkable story as well. Im featuring her in an upcoming issue of my magazine as part of a tribute to Lumbee women. I interviewed her Jan. 1, 2011 on her 87th birthday. It was one of my best interviews ever. I have her talking about her life's experiences on video. I also have Aunt Pearl as well. I featured her before as well. Take care and let me know if you have any other questions.

What is your magazine if you

What is your magazine if you don't mind me asking? And could you help me with some information on some of my family that is also Lumbee?

why is it the Lumbee tribe

why is it the Lumbee tribe federally recognized

You can read more about that

You can read more about that here: Part V: The Fight for Federal Recognition