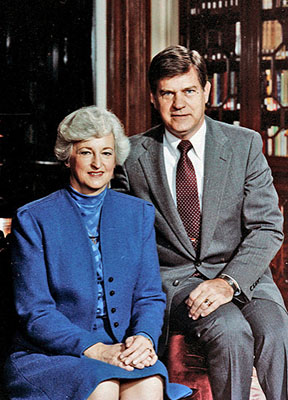 Always ready for the next challenge in her life, Dorothy Ann McAulay Martin looked with anticipation to her role as first lady alongside her husband, Governor James Grubbs Martin. She remembered being told to be aware that each day she would be involved with history and that she and her husband were the stewards of the Executive Mansion and the office he held. These ever present thoughts kept her focused during their eight-year tenure. With effervescence and a contagious sense of humor, Dottie Martin could comfortably relieve the pressures in many situations. She was inspiring, intelligent, confident, strong, supportive, and energetic.

Born in Charlotte on January 21, 1937, to Benson Wood and Dorothy Louise Gill McAulay, Dottie Martin grew up there and in South Carolina. While attending a Presbyterian youth conference, she met her future husband, who was the son of a minister. She attended Queens College and the University of South Carolina before marrying James G. Martin on June 1, 1957. Dottie Martin worked in the Industrial Relations Department at Princeton University while her husband earned a doctorate there. They moved to Davidson, where he taught chem­istry at Davidson College and she taught kindergarten from 1960 to 1972.

While in Washington, D.C., where her husband served as a congressman for twelve years, Dottie Martin was devoted to rearing their three children: James Grubbs Jr., who was born on December 19, 1959, married Patricia Higgins, and had two children; Emily Wood, who was born on June 20,  1962, married Evan Richey, and had one child; and Arthur Benson, who was born on February 5, 1972. Dottie Martin also worked as a real estate broker for seven years once the children were settled in school.

During and after campaigning for her husband's election as governor, Dottie Martin set her sights and energy on the well-being and safety of children. In an interview she stated that for many years she had "growing concern for the changes that were affecting the family unit and particularly the children in our society." In order to enable parents to have their children fingerprinted, she encouraged the establishment of specially designated resource stations in twenty-one localities throughout the state.

She was most concerned about abused and victimized children and those with drug and sex­ually related problems. She learned about the Parent to Parent program at a National Governors' Conference and established the program in seventy of North Carolina's one hun­dred counties. She received a national award for that achievement. Dottie Martin was also an active member of the Committee on Alcohol and Drug Abuse Among Children and Youth, which focused on the issues facing adolescents in our society.

Dottie Martin continued her efforts on behalf of children when her husband appointed her to head both the Commission on Child Victimization and the Commission on the Family. From her perspective as leader of those two groups, she wrote, "Without the support, concern, and love of the family, our children fail to receive the care and guidance they need to become well­ adjusted, responsible, and caring adults of the future."

After seeing plantings of wildflowers along highways in Texas, Dottie Martin contacted the Department of Transportation to see if wildflower beds could be cultivated along North Carolina's highways. The department began the program in 1985 and subsequently won a national award for their efforts. They then presented their award to the first lady in recogni­tion of her inspiration in starting the successful program.

Upon her arrival at the Executive Mansion, Dottie Martin noticed how much work was needed on the grounds. Several cold winters and dry summer seasons had caused damage. She raised funds, beginning with a grant from the Junior League of Raleigh, and eventually collected $185,000 to re-landscape the grounds of the mansion, especially the Victorian garden located on the south lawn. On May 27, 1987, that garden was dedicated to Mrs. Martin, "who through her love of nature, envisioned this enhancement to orth Carolina's natural beauty." Public tours and an informative brochure on the garden and grounds were created under her direction.

After leaving the Executive Mansion, Dottie and James Martin lived in Charlotte and Lake Norman. Dottie Martin was active in fund raising, serving on the board of trustees of Queens College, and the board of the Thurston Arthritis Center. She also was a hands­ on member of the advisory board of the Family Cen­ter for Abused and Neglected Children, an organiza­tion dedicated to rebuilding the shattered lives of abused children and dysfunctional families-"A Place Where Hope Grows." Her real joy was her three grandchildren's childhood.

As she reflected on her time as first lady, Dottie Martin said that she was appreciative of the opportunities and that even though she "had not prepared for a life in the political spotlight, she had worked hard to make the most of it." She realized that from her position she could positively affect causes that interested her.