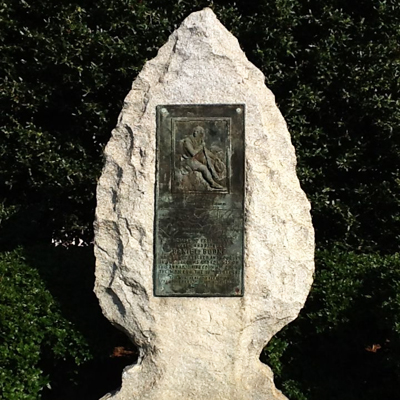 Description: A memorial to pioneer and trail maker Daniel Boone stands at Summit Street in Winston-Salem. The monument is a large granite arrowhead; in the center of the arrowhead is a bronze plaque with a bas-relief image of Boone, seated with his gun and accompanied by his dog. It memorializes Daniel Boone as well as those who contributed to and used the westward trails from the 1750s onward.


Images: Daniel Boone with gun and dog | Map of Boone Trail and inscription

Inscription:
BOONE TRAIL HIGHWAY / [Picture depiction of Daniel Boone with gun and dog to right] / DANIEL BOONE
IN MEMORY OF TRAIL MAKER / HUNTER AND PIONEER / DANIEL BOONE / WHO HUNTED, FISHED AND FOUGHT / IN THE STREAMS AND FORESTS OF / THIS AND ADJOINING COUNTIES DURING / THE MIDDLE OF THE 18TH CENTURY
THIS MONUMENT IS ERECTED BY / THE BOONE TRAIL HIGHWAY ASSOCIATION / COMMITTEE / R. H. HANES / C. T. MICKEY / W. A. BLAIR / T. B. PINDER / O. B. EATON / J. H. RICH / R. S. GALLOWAY

Unveiling & Dedication: Preceding the monument dedication, the Boy Scouts held a field event in Hanes Park and took part in a variety of competitive activities, including first aid and fire building. Troop 11 from the Children's Home won the competition. When the monument was dedicated, two Wiley School students spoke on the life of Daniel Boone. A group of students carried flaming torches to illuminate the evening ceremony.

Subject notes: Daniel Boone, a folk hero, is most famous for his exploration and settlement of Kentucky, having traversed through North Carolina and Tennessee in order to found the village of Boonesborough. He blazed the Wilderness Trail through the Cumberland Gap; the trail was used for more than fifty years to reach Kentucky. An organization by the name of the Sons of Daniel Boone was the precursor to the Boy Scouts of America.

Landscape: The monument stands in the triangular island where Reynolda Road becomes West End Boulevard at the east end of Hanes Park.