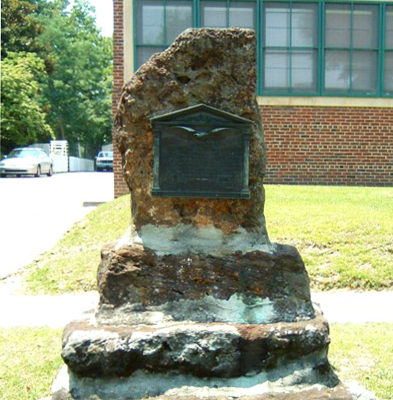 Description: A bronze tablet sits upon a roughly-cut stone. The tablet is in relief and in neo-classical style; a pediment with decorated tympanum sits above an eagle with its wings spread across the tablet. Below is the text flanked by two ionic columns.
A bronze plaque dedicated to the FILI (Fayetteville Independent Light Infantry) Bicentennial celebration is added at base of the monument.

Images:
Bronze plaque |
Plaque at base of the monument

Inscription:
Bronze plaque: ARSENAL / THIS TABLET MARKS THE SITE OF AN IMPORTANT / ARSENAL OF THE CONFEDERATE GOVERNMENT. / AUTHORIZED BY THE UNITED STATES CONGRESS, / 1836, CAPTURED BY NORTH CAROLINA, APRIL / 22, 1861. / TRANSFERRED TO THE CONFEDERATE / GOVERNMENT, JUNE 5, 1861, AND DESTROYED / BY MAJOR-GENERAL W. T. SHERMAN, / MARCH 11-14, 1865. / ERECTED 1928 BY / THE NORTH CAROLINA HISTORICAL COMMISSION / AND THE J.E.B. STUART CHAPTER / UNITED DAUGHTERS OF THE CONFEDERACY

Sponsor: The North Carolina Historical Commission and the United Daughters of the Confederacy, J.E.B. Stuart Chapter.

Post dedication use: The park in which the monument stands is used for educational events led by the Museum of the Cape Fear.

Landscape: The monument is located in the four acre Arsenal Park. It is next to the Museum of the Cape Fear. Though little remains of the Arsenal, one partial frame outbuilding still stands on the site.