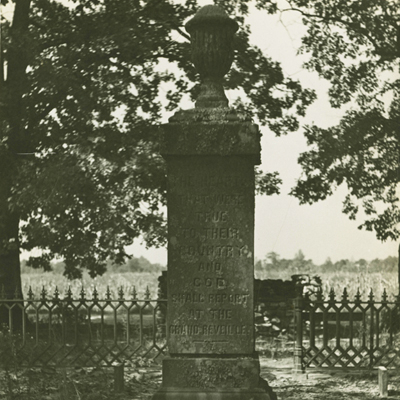 Battle of Averasboro Confederate Marker
Chicora Cemetery, Dunn
View complete article and references at Commemorative Landscapes of North Carolina at: https://docsouth.unc.edu/commland/monument/425
Description: The 1872 Confederate memorial is a simple stone column marker located within the fence of the historic Chicora Cemetery at the Averasboro Battlefield and commemorates the Confederate soldiers fallen at the Battle of Averasboro on March 15, 1865. The entire structure is between five and six feet tall and is composed of a short, thin sandstone column mounted on a two-tier base which tapers in toward the column. The column has a shallow cap, and its four faces bear inscriptions. One face is inscribed with the patriotic Latin phrase Dulce et decorum est pro patria mori: It is sweet and fitting to die for one's country.
Inscription:
Side: BATTLE / OF / AVERASBORO / MARCH 16 / 1865
Side: DULCE ET DECORUM / EST PRO / PATRIA MORI
Side: THE HEARTS / THAT WERE / TRUE / TO THEIR / COUNTRY / AND / GOD / SHALL REPORT / AT THE / GRAND REVEILLE.
Side: IN / MEMORY / OF OUR / CONFEDERATE / DEAD / WHO FELL UPON / THAT DAY.
Dedication date: May 10, 1872
Creator: Smithville Memorial Association, Unspecified
Materials & Techniques: Local sandstone
Sponsor: Smithville [most likely Smithfield] Memorial Association
Unveiling & Dedication: In her 1941 book compiling the histories of North Carolina's Confederate memorials, Blanche Smith quoted an unnamed newspaper article for the details of the monument's dedication. As one of the earliest commemorations in the state seven years following the war, the article alluded to the effort by local citizens to erect a monument at a time just following the war when funds were scarce: "Nowhere in the South has there been more attention paid to the Confederate dead than in this neighborhood" (Smith, p. 23). More than 500 were in attendance at the cemetery where the Reverend D. D. McBryde gave the benediction and where the monument's foundation was laid by local masons while women decorated the graves and sang. Following the dedication, a procession moved to a grove of trees nearby where the Hon. Thomas C. Fuller, a Confederate congressman and later federal judge, gave an address from a stand decorated with flowers and evergreen.
Post dedication use: The site has been used for Confederate Memorial Day services.
Subject notes: The Battle of Averasboro monument was built to commemorate the more than 400 soldiers who died in the Battle of Averasboro, fought in both Harnett and Cumberland Counties. Blanche Smith suggested in her 1941 book that the iron fence around the cemetery was itself a memorial, placed there in 1868 by the Smithville Memorial Association, a ladies group that would in 1904 become the Chicora chapter of the United Daughters of the Confederacy. She noted from a newspaper account that the Association had purchased the fence at A. W. Steel's Store and that the owners of the shipping companies had shipped the fence for free. She also noted that most of the men buried at the site were South Carolinians, making the use of the Indian word "Chicora" (meaning Carolina) by the Association a fitting name for the cemetery. It is likely that Smith incorrectly used "Smithville" for "Smithfield" in her text, as Smithville is located in Brunswick County and Smithfield is just northeast of Dunn in Johnston County.
Location: The monument is located near the center of the historic Chicora Cemetery at the Averasboro Battlefield. Averasboro Battlefield is located on the east side of NC Highway 82, also known as Burnett Road.
Landscape: The monument sits on the grass surrounded by small grave markers. The cemetery is enclosed by a low gridiron fence.
City: Dunn
County: Harnett
Subjects: Civil War
Latitude:
35.26376
Longitude:
-78.67288
Subjects:
Monuments
Places
Authors:
Commemorative Landscapes of North Carolina
Origin - location:
Harnett County
Dunn
From:
Commemorative Landscapes of NC, University of North Carolina Chapel Hill.