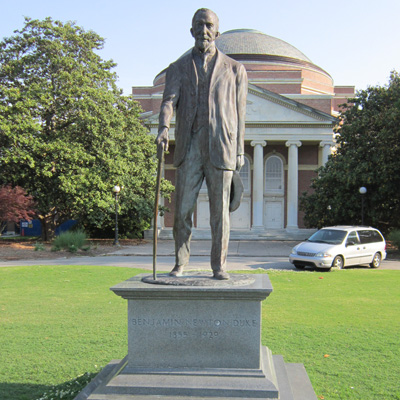 Benjamin Newton Duke
Duke University, Durham
View complete article and references at Commemorative Landscapes of North Carolina at: https://docsouth.unc.edu/commland/monument/221
Description: A bronze likeness of Benjamin Newton Duke stands upright as he rests his weight on a cane in his right hand. He is clad in a suit and holds his hat by his knee. The statue rests on a low square granite pedestal.
Nickname: Ben
Inscription:
Front: BENJAMIN NEWTON DUKE / 1855 - 1929
Image
Back: Trustee / Trinity College / 1889 - 1924 / Duke University / 1924 - 1929
Image
Right:
Industrialist
Image
Left:
Benefector
Image
Dedication date: 10/2/1999
Creator: Stephen H. Smith, Sculptor
Materials & Techniques: Bronze, granite
Unveiling & Dedication: The statue was dedicated on October 2nd during a Duke family reunion. This was also the 75th Anniversary of the founding of the Duke Endowment and of the Duke University name. William E. King, University Archivist, provided an unveiling speech discussing the life of Benjamin Duke.
Post dedication use: During Duke Universities's Quadfest, students regularly decorate the statue. The statue has worn a ninja mask, a pink bikini, an orange traffic cone, and a number of togas. The decoration of the Benjamin Duke statue was prohibited in 2005, with officials claiming it to be vandalism; however, students continue to dress the sculpture.
Subject notes: Benjamin Duke (1855-1929) was vice-president of the American Tobacco Company, head of his family's textile business, and co-founder of the Southern Power Company (today Duke Power). He was a key player in the relocation of Trinity College to Durham in 1892 and later donated substantial sums to be used for additions and improvements to the school.
Landscape: The statue was placed on East Campus, the original site of Trinity college. It sits in the main quad facing away from Baldwin auditorium.
City: Durham
County: Durham
Subjects: Educational Institutions,Historic Civic Figures,Historic Philanthropic Figures
Latitude:
36.00844
Longitude:
-78.91467
Subjects:
Monuments
Places
Authors:
Commemorative Landscapes of North Carolina
Origin - location:
Durham County
Durham
From:
Commemorative Landscapes of NC, University of North Carolina Chapel Hill.