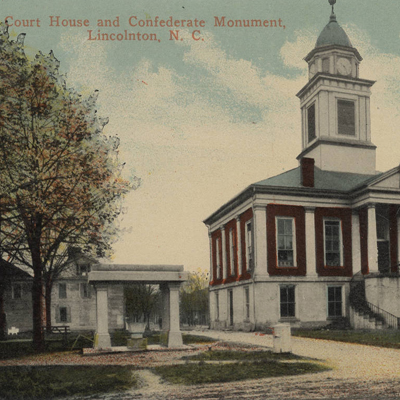 Confederate Monument
Lincolnton
View complete article and references at Commemorative Landscapes of North Carolina at: https://docsouth.unc.edu/commland/monument/290
Description: The monument is a marble drinking fountain placed under a granite arch. The arch is composed of a two-tier granite top placed over four large square columns which rest atop a base of granite with a marble inlay.
Vintage postcard image of monument
Inscription:
Front: TO THE CONFEDERATE SOLDIERS / OF LINCOLN COUNTY
Rear: ERECTED BY WALLACE REINHARDT CHAPTER / CHILDREN OF THE CONFEDERACY
Dedication date: 5/11/1911
Materials & Techniques: Granite, marble
Sponsor: Wallace Reinhardt Chapter, Children of the Confederacy
Cost: $1,250
Unveiling & Dedication: A newspaper account of the unveiling reported that more than 6,000 people were positioned throughout the town for the event. The day began with a memorial service in the courthouse beginning at 9:30 a.m. with a prayer led by the Rev. W. R. Minter, the memorial address given by the Hon. A. Nixon, and a benediction by the Rev. W. P. Dye. A procession to various cemeteries around the town followed, where veterans and the United Daughters of the Confederacy placed evergreen wreaths and flowers upon the graves of veterans. At 11:00, a procession of Children of the Confederacy with carriages and floats went to the train station to meet Mrs. Stonewall Jackson and all proceeded to the monument for the unveiling. The monument was presented to Lincoln County by Major W. A. Graham, Commissioner of Agriculture of North Carolina. Judge Nixon accepted the monument, and addresses were given by Graham, Nixon, and Governor Kitchin.
Location: The monument is located in front of the Lincoln County Courthouse at the intersection of Court Square Drive and West Main Street.
Landscape: The monument sits in front of the Courthouse, on a grassy area shaded by trees between the sidewalk and the city street.
City: Lincolnton
County: Lincoln
Subjects: Civil War
Latitude:
35.47143
Longitude:
-81.25726
Subjects:
Monuments
Places
Authors:
Commemorative Landscapes of North Carolina
Origin - location:
Lincoln County
Lincolnton
From:
Commemorative Landscapes of NC, University of North Carolina Chapel Hill.