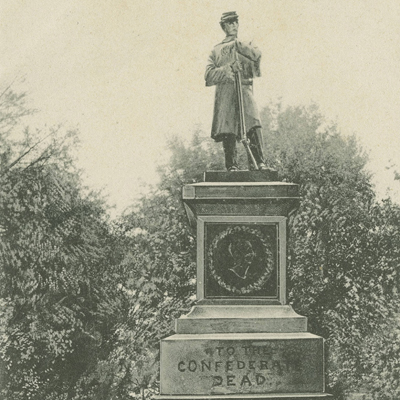 Confederate Soldiers Monument
Oakdale Cemetery, Wilmington
View complete article and references at Commemorative Landscapes of North Carolina at: https://docsouth.unc.edu/commland/monument/291
Description: A bronze statue of a common soldier at parade rests atop a square granite pedestal. The soldier is depicted with both realism and elegance, with his pose confident, relaxed and casual. His left arm is draped loosely over the end of his rifle as it rests on the ground and his left leg bent slightly to the side. Large bronze medallions with the classical depictions of the likenesses of Robert E. Lee and Thomas "Stonewall" Jackson are mounted on the front and rear faces. Lee appears on the front and Jackson on the rear.
The monument rests atop what is considered to be a burial mound for the bodies of more than 300 Confederate soldiers. The structure below the base of the monument has changed over time. The stone base of the monument originally sat directly atop an ostensible and sharply angled grassy mound at the site. The circular mound was surrounded by a low border framing the flat ground around the mound with low shrubs planted around the circle. At some point, the mound was replaced by a more grand circular stone or concrete surround with six stone steps leading to the base of the monument. An engraved plaque is located between the 2nd and 3rd steps and was originally located in the dirt at the base of the mound. A low gridiron fence surrounds the burial and monument area.
The plaque was added later and specifically commemorates the unidentified bodies of 550 soldiers who died at the Battle of Fort Fisher and are buried in the Confederate Plot of Oakdale Cemetery. It also acknowledges the work and sacrifice of those who labored to build the monument.
Inscription:
Base: TO THE CONFEDERATE DEAD
Plaque: THIS MONUMENT WAS DEDICATED MAY 10, 1872 / TO PERPETUATE DEEDS OF THE BRAVE AND IN GRATEFUL / TRIBUTE TO THE MEMORY OF 550 HONORED UNKNOWN / CONFEDERATE DEAD AT THE BATTLE OF FORT FISHER / WHO LIE BURIED HERE / SPONSORED BY THE LADIES MEMORIAL ASSOCIATION LATER MERGED WITH DAUGHTERS OF THE CONFEDERACY / SELF DENIAL - WORK - PRAYERS - TEARS - HEARTS BLOOD / ENTERED INTO ITS BUILDING
Dedication date: May 10, 1872
Creator: William Rudolf O'Donovan, Designer, Sculptor Maurice J. Power, Sculptor, Foundry National Art Foundry, Foundry
Materials & Techniques: Bronze, with a base of North Carolina granite
Sponsor: Ladies Memorial Association (which later became the Cape Fear Chapter of the United Daughters of the Confederacy)
Cost: $7,000-$8,000
Unveiling & Dedication: The dedication was held at the monument in the Confederate Lot in Oakdale Cemetery. The Ladies Memorial Association was also honored at the event.
Subject notes: On December 15, 1867, the cemetery corporation gave the Ladies Memorial Association a plot of land to place a monument to the soldiers who died in the Civil War. Many soldiers who had died at Fort Fisher were already buried on the public grounds of Oakdale Cemetery, and they were later re-interred in this location.
Landscape: The monument sits in the center of the mound in the Confederate Lot. An iron fence surrounds the area, with a few stone steps leading up to the fence.
City: Wilmington
County: New Hanover
Subjects: Civil War
Latitude:
34.24714
Longitude:
-77.93194
Subjects:
Monuments
Places
Authors:
Commemorative Landscapes of North Carolina
Origin - location:
New Hanover County
Wilmington
From:
Commemorative Landscapes of NC, University of North Carolina Chapel Hill.

Is it true that in order to

Is it true that in order to make room for dead U.S. troops when the Wilmington National Cemetery was established Confederate dead, most of whom fought in the defense of Wilmington and at Fort Fisher, were disinterred from the site of the present National Cemetery and left for their families to claim? Are theses not the “unknown Confederate dead” buried in Oakdale Cemetery? Please let me know. Thank you.

Thank you for this article.

Thank you for this article. My great grandfather's older brother Caleb Rudisill is here I think. He died in last battle of Ft. Fisher called to NC Junior Reserves died age 16 from Luncoln County, NC. His father was in POW camp Delaware at time Caleb died...Absalom Rudisill. Do they have individual markers there?